The sketchy pink boxes are going away 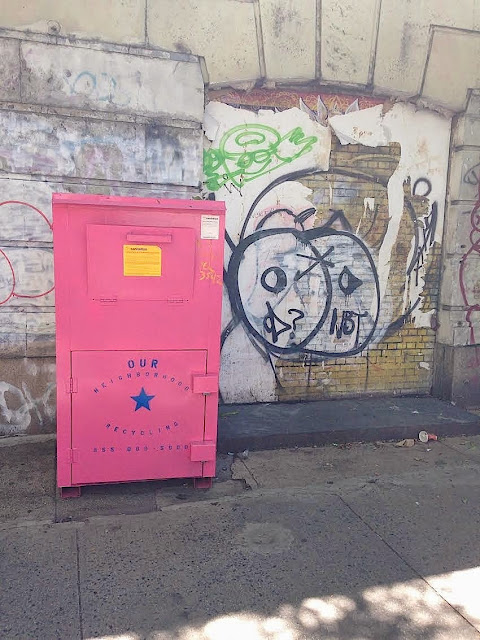 [East 10th Street between Avenue B and C]

City workers have been hauling away those recycling boxes that were unceremoniously dumped around the neighbor the last week of June.

The Sanitation Department has marked other illegal boxes for removal. 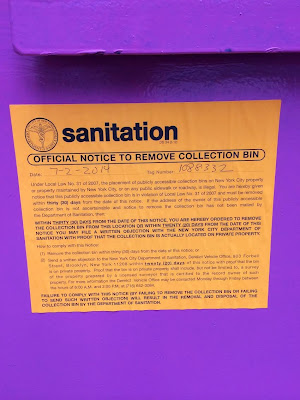 The Times had an article on this recycling trend yesterday.

A growing number of companies — many of them based in New Jersey — are illegally placing used-clothing bins throughout New York City, blocking sidewalks and serving as magnets for litter and graffiti. The receptacles typically have signs that indicate donated goods will go to the poor or, in some cases, to legitimate charities. But, city officials said, the needy do not benefit from much of what is collected. Instead, the clothing is often sold in thrift stores or in bulk oveseas, with the proceeds going to for-profit entities that can be impossible to trace, or even to contact.

“They have become the bane of our existence,” Kathryn Garcia, the city’s sanitation commissioner, said. “We have seen a significant uptick in the number of clothing bins placed illegally on public sidewalks. A dramatic increase.”

You can report the boxes to the city here.

Previously on EV Grieve:
About those new sketchy pink boxes around the East Village
Posted by Grieve at 5:00 AM

City picks them up; sells them back to original company; company puts them back on the street.

Ah! It's the circle of life.

Please report the one on 2nd street and 1st ave, it's tipped over and collecting trash (and urine) : http://www.nyc.gov/html/dsny/html/contact/request_collectionbinremoval.shtml

they are also in "lower" midtown... saw one around 23rd and and 1st