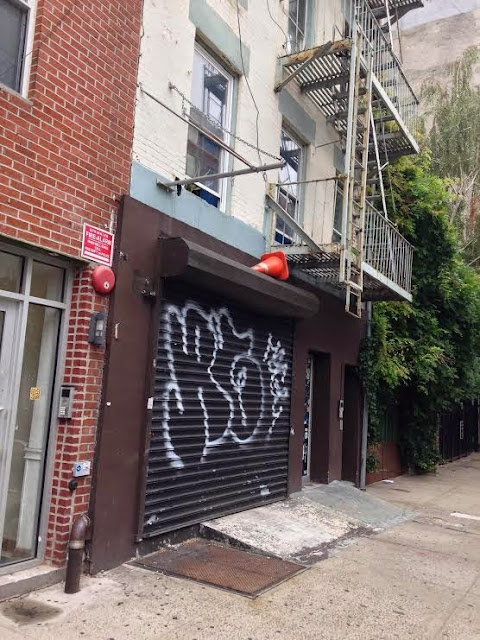 Not sure exactly when the doors closed for good. (There's a Yelp review from July 17.)

This had been an expected development, as Eater noted back on June 30.

Elsa's website says that they "will be moving to a new location at the end of July! Details on the new space will be coming soon."

Elsa's bartenders are apparently telling patrons that the bar is not relocating at all and will simply be shutting its doors. An employee at the bar tells Eater that the landlord refused to renew the lease, because he wants to "open his own place," although its not clear what that will be.


In June, CB3 OK'd an applicant taking over the space. Per the minutes (PDF!) from the CB3 meeting:

The working name for the new venture is Canvas Bar.

Elsa, named for fashion designer Elsa Schiaperalli, began in November 2008 in the former Hanger Bar (and before that Plant Bar) space here between Avenue B and Avenue C.

Elsa's owners opened Ramona in Greenpoint earlier this year.
Posted by Grieve at 4:50 AM

Email ThisBlogThis!Share to TwitterShare to FacebookShare to Pinterest
Labels: Elsa

If this guy ran Hangar and Plant then this could be good news.

It is not the person who ran Plant Bar, that was me, and I am not involved

That's really bad news. That bar was kind of special, unique in decor and vibe. It will be missed.