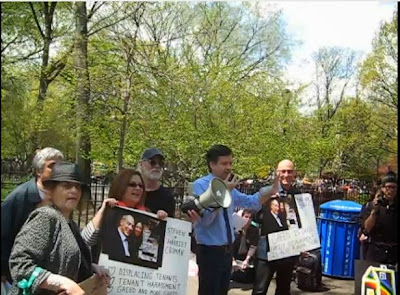 [State Sen. Brad Hoylman speaking out against Steve Croman at rally in Tompkins Square Park in May]

"Steven Croman’s pattern of tenant harassment must come to an end. Tenants from his buildings have contacted us with accounts of chronic harassment and intimidation – including disruptive building maintenance, frivolous lawsuits, and most egregiously, the dispatching of a ‘private investigator’ to apartments to intimidate tenants.

“We’ve worked closely with a coalition of tenants and advocacy groups like Good Old Lower East Side, Cooper Square Committee, and the Urban Justice Center to address Croman’s tactics of driving tenants, many of whom are rent regulated, out of their homes. We applaud the Attorney General’s investigation into Croman, and we will continue to support tenants’ efforts as it unfolds."

Previously on EV Grieve:
Watch a lot of people speak out against Steve Croman and 9300 Realty

Karma may have been procrastinating, but when it finally shows up the bite marks it leaves on your ass are usually permanent and painful. Croman's best bet is to sell it all to someone who treats tenants like human beings, and leave town before sundown. The heat on him now is going to be as bad as the summer heat in his steam-filled apartments..

Great job by Hoylman, Kavanaugh, Mendez, Squadron, Brewer and Chin, we finally have a group of elected officials who will stand up for tenant rights and a City Council and Mayor to back them up.

Chin and Mendez and CB3 have always gotten calls/complaints about Croman but they've always looked the other way or fell on deaf ears, out of fear, or Croman is in their pockets, but now that the State D.A. is on it, they're hanging on to Schneiderman's coat tail.

I agree with 9:12. Interesting that it took the AG denouncing Steve Cro-Magnon before these spineless wimps were finally willing to stand up and talk tough against a man their offices have been fielding complaints about for years. And is Schneiderman's back really broad enough for all of them to hide behind if things get rough? And why didn't they add Ben Shaoul and Jared Kushner while they were at it, or does that have to wait until Schneiderman takes aim at them, too?

Rats are the first to fee a sinking ship.

Maybe they should investigate all of the regulated tenants too that exploit the system and live basically for free at the owners expense.

Annon: 11:53
Of course there must be hundreds of thousands of "free" rent leases out there.

Yeah, 11:53, all rent regulated tenants are rich spoiled playboys with beach houses and Jaguars, mooching off their landlords, who, of course, are always hard-working immigrants who scrimped and saved all their lives to buy this little piece of the American dream..

August 1, 2014 at 11:35 AM - Oh boo hoo. Nobody's living for free at the owner's expense anymore, rent control is over and so is the day of the mom and pop landlord as Wall Street and firms like Croman's have taken over. And I have adult rent stabilized neighbors with good jobs who have to take in roommates in order to cover their "cheap" rents.

Look what you can gouge tenants for a market rate 1 bedroom/1 bath apts in the EV: from $2,900 to $5,075/month says page 1 of listings of Zillow. In my building, they put up temp walls in the living room to turn that into an extra bedroom or two to make them affordable.

There's a reason why landlords are about the most despised and not-trusted class of humans in NYC.

Squadron, Hoylman, Kavanagh and Brewer = the real deal. Mendez and Chin = much less so.

Hey Ken. So rent control is over? I guess the three tenants in my building who pay an average of $400 per month for a 3 bedroom apt haven't gotten the memo.

Rent Control ended in the late sixties I believe less then 40k of units belong under its regulation now. Rent stabilized units in the last decade have fallen significantly low percentage of availability do not allow market forces to act correctly instead monopoly centric forces dominate the market at the determinate of the whole.

It all ties together. Complain that only dbags mover here and ruin the city. But make sure a majority of the housing never hits the market. Add in demand and lack of supply. Its not complicated. As long as massive numbers have their controlled/stabilized apts they could care less. Why care about gouging when you got yours? The system works for the stabilized haves. You should want to keep things as they are. Right?

Greedy unscrupulous landlords like Steve and Harriet Croman, Shaloms,Jared Kushner and (baby Croman - Ben Shaoul) are souless. They have destroyed neighborhoods and ruined people's lives, by breaking them emmotionally and financially. They leave a trail of misery and heartache to all they encounter, and one day it will come back to them and their offspring a thousand-fold. Steve Croman is the Bernie Madoff of the Real Estate Industry and... Look what happened to him and his family. Croman's real estate enterprise is a Ponzi Scheme.
The fact is that Croman owns over 170 buidings now, purchased with his tenant's blood. May Croman have it even worse than Bernie Madoff, only this time make sure Steve Croman's equally greedy, driven and evil wife Harriet Croman goes down with him.

I hope that the Attorney General puts the Cromans in jail where they belong along with their sleazy unethical lawyers R & R, Farber & Dank, Heiberger, their criminal property managers Christine, Annabelle & Janeth, Orin G, D. Francis, Barry B, A Falconite, S. Yow, Morrison, and all their hired guns & goons.
etc. etc.....all those who conspired with the Cromans to terrorize and torture their tenants. What goes around, comes around. Well Mr. & Mrs. Croman and crew, you all thought you were above the law, but you will all soon learn that you're not.
Your tenants pray for that day.

That the rent laws have been decimated isn't the fault of the people grandfathered in. The real issue you should be on the streets fighting about is that rent laws should be available to everybody, not just those who signed a lease 20 years ago.

Those of you saying that keeping those apartments out of inventory are morons--there are actual people living in them. When Boston removed rent regulation, rents went down an average of 10% and then pretty quickly normalized upward, the only beneficiaries are the landlords, not tenants.

The rent is too damn high and it's not because of rent regulation, it's because there are people willing to pay those prices. Apartments aren't scarce, demand is high by people with no intention of staying because the rents are stupid, it's a short term solution to cram 4 people into 400 square feet. Rent regulations created long term tenants who invested in their neighborhoods which is why today so many are willing to put over half their net pay checks to a scumbag like Croman.

You can get a 1-bedroom in Hell's Kitchen or kips bay for $2000 where the same in the EV is $3000 and they have many or more rent regulated tenants.

For those who say getting rid of rent stabilization will lower market rate rents, history has already proved that wrong. In the early 70s, rents in NYC increased by over 50% once rent stabilized apartments left the system, In Santa Monica, rents increased 100% over the next decade, and in Boston, they went up 14% citywide just a year later.

Not only did rents go way up for everybody, but landlords stopped investing in renovations since there were so few affordable apartments that people would rent any hole in the wall that was available. The landlords proved that given the chance to price gouge and not invest in their properties that they will do so every time.

If anyone thinks Croman, Shaoul, Kushner, Trump, Tishman, CW Capital or any of the other vultures an be trusted to keep housing prices low, just read the history of what has already happened in NY and other cities, and explain why the exact same thing won't happen again. In fact one of the main reasons market rate apartment rents keep climbing is that there are now fewer stabilized apartments competing with them to keep the rents affordable. Everyone benefits from a good supply of affordable apartments, they help keep all rents lower, and when they are gone everyone pays more rent.

Here's a bit of NYC's history when you let landlords set the price: When New York Tried Vacancy Decontrol

In the spring of 1971, the New York State Legislature enacted full vacancy decontrol, applicable to all apartments that became vacant on or after June 30, 1971.

This law resulted in an immediate, massive crisis in the downstate housing market. In only 2 1⁄2 years, 300,000 rent-controlled units and 88,000 rent-stabilized units were deregulated.

In its 1974 report, the Temporary State Commission on Living Costs and the Economy appointed by Governor Rockefeller found that vacancy decontrol had resulted in average rent increases of 52 percent, while operating costs for landlords increased by only 7.9 percent.

The Commission also found that deregulation led to disinvestment in the housing stock: there was a 30 percent drop in renovation expenditures, since the supply of affordable housing was so small that landlords were able to impose massive vacancy rent increases without making improvements.

The History of Vacancy Decontrol

You are right on Giovanni.

Thank you Eric Schneiderman for having the guts to do this and also my gratitude and admiration for Brad Hoylman, who so admirably,boldly & fearlessly spoke out against the Cromans and this whole disguisting real estate industry and against Albany politics, while the other politicians cowered because they were afraid of being sued.
I thank the both of you and
Bless You.

My thanks also to Gale Brewer and Brian Kavanaugh who are also to be applauded, for speakibng out against Croman and especially for their excellent testimony at the rent guidelines board hearings!