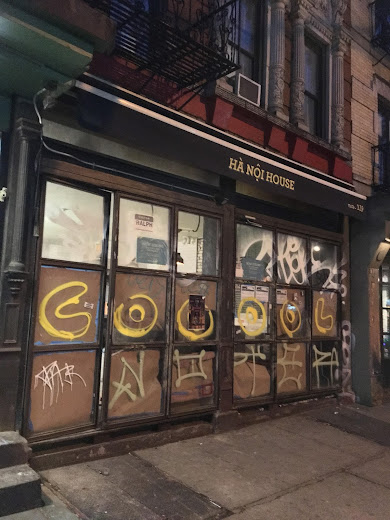 As noted back in the spring, a Vietnamese restaurant is in the works for the space. According to the application on file for public viewing at the CB3 website, the principals include veterans of Stephen Starr's Starr Restaurants, whose NYC establishments include Upland, El Vez and The Clocktower.

The proprietors originally sought a full liquor license, though CB3 was unwilling to approve one in this saturated area. (They eventually settled for a beer-wine license with earlier closing times, though, according to the minutes of the April CB3 meeting, the proprietors "then chose not to agree to make as conditions of its license the aforementioned stipulations and elected not to withdraw its application and return to Commuity Board 3 for additional hearing of its application.")

There was an open call yesterday for cooks. Per the ad: "Hanoi House is a new Vietnamese restaurant from two seasoned NYC restaurant professionals and a native Vietnamese chef. We are hiring part time and full time Line Cooks and Prep Cooks to start within the next few weeks."

Great another spring break loud restaurant I assume for the kids.

Sounds like some good cooking.
Will check them out. I love this food.

Would love a decent Vietnamese place in the hood.

So are they going to go straight to SLA? If so fuck them. Too bad, as there aren't many northern Vietnamese places in NYC.

YES! I hope they have bun cha. (I'm being specific in case they read this post and are menu planning haha)

just below this is:
Community Groups and Information Listing (there are a list of community groups principles and protocols)

contact the groups closets to you for complaints related to bars/restaurants, landlord harassment or any other issue impacting you as a resident.

further down you will find CB 3 Guide to 311 Commercial Noise Complaints.

By joining the mailing list you will receive the CB 3 monthly calendar which will include a list of all liquor license applications to be heard at the CB 3 SLA licensing committee, as well as information associated with those applications, in addition to all other agenda items for all other committees.

This is in a Jonis Realty building. Residents at 131 Avenue A haven't had gas in 13 months and some residents don't have heat or hot water.

121 Avenue A has no gas and same management company.