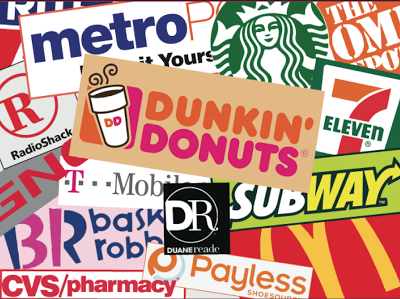 [The same image and caption that we use every year]

The Center for an Urban Future has released its ninth annual State of the Chains report... so far they've just sent out the top-line results.

Per the EVG inbox:

Each of the outer boroughs experienced marked increases in the number of national retail stores in 2016, while Manhattan saw its stronghold on national chains dip slightly from previous years ...

The study shows that Dunkin Donuts remained New York City’s largest national retailer with 596 stores city-wide and widened its lead over second place retailer, Subway, which has 433 locations. Dunkin Donuts now has 163 more stores than any other retailer in the city.

Dunkin Donuts topped our list for the eighth consecutive year as the largest national retailer in New York City, with a net increase of 24 stores compared to 2015. Subway is still the second largest national retailer in the city, but it has 12 fewer locations than last year. Rounding out the top ten national retailers in New York are MetroPCS (with 326 stores), Starbucks (317), Duane Reade/Walgreens (303), T-Mobile (223), Baskin-Robbins and McDonald’s (217 each), Rite Aid (185), and CVS (153). There are 12 retailers with more than 100 stores across the city, down from 13 last year.

Among the study’s other major findings:

• Starbucks has more stores in Manhattan than any other national retailer with 223 locations, while Dunkin Donuts topped the list in each of the other boroughs.

We'll update later when the Center releases the full report, which shows the number of chain stores by zip code in the city.

As with any invasive species chain stores are here to stay just like Norwegian rats and pigeons.

Why are there so many MetroPCS stores? Starbucks/Dunkin/Wallgreens I get.. but MetroPCS?

Dunkin' Donuts doughnuts truly suck wind. Like eating frosted cardboard. It's Donut Pub on 14th and 7th for me!

Because they offer phones to people with shitty credit.