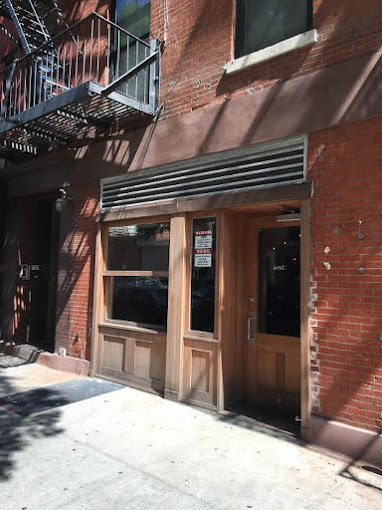 As we first noted back in the summer,, veteran restaurateur Peter Kane (Bowery Meat Company, Stanton Social, Essex & Beauty, etc.) is opening a two-level restaurant called Out East on 509 E. Sixth St. between Avenue A and Avenue B.

Out East will serve "New American fare with influences from the coastal regions of Long Island." It’s largely inspired by the beach, which is the partners’ "preferred downtime destination."

Apparently the restaurant will be a spot for any New Yorkers who want to leave the city but do not want to actually go to Long Island: "Out East is the stylish, coastal cosmopolitan, downtown dining destination that transports guests away from the city for a night."

Well, it's really a quiet block for a downtown dining destination. Apparently some neighbors are cool with this: According to CB3, there were 52 signatures of support from area residents when the full liquor license went up for approval last July.

In any event, Out East will have a seafood-centric menu with a raw bar. Out East is expected to open next month.

Previously on EV Grieve:
Out East quietly announces itself on 6th Street
Posted by Grieve at 4:00 AM

Email ThisBlogThis!Share to TwitterShare to FacebookShare to Pinterest
Labels: East Village, Out East

You want sand in that?

I think people who want Hamptons/beach food should have to go to Long Island to get it. We have enough grit here without needing a side order of sand.

Coastal Long Island fusion? Geflilte Fish l'orange, anyone? Boy, how desperate is the restaurant industry getting just to lure foodie's.

Wow, those guys run the douchiest restaurants that, yes, have good food, but cater to the most non-residential, loud and obnoxious yuppie crowds ever. I can't believe they're opening on that block.