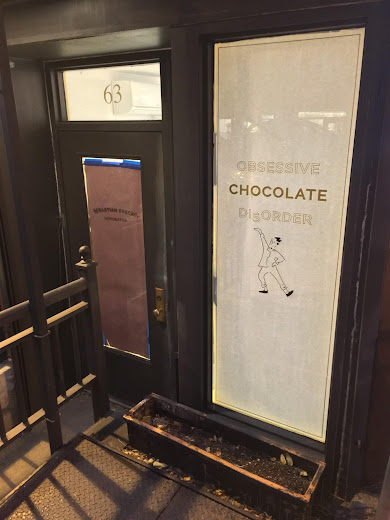 Signage is up at 63 E. Fourth St. noting "Obsessive Chocolate Disorder" in this storefront between Second Avenue and the Bowery. The name on the door notes the name of Sebastian Brecht, Chocolatier.

A 2007 feature in the Times on Brecht, a well-regarded pastry chef, reports that he "built a reputation by supplying Dean & DeLuca with cakes during its glory years and by working with fancy party caterers who fed his confections to the likes of Mick Jagger, Bon Jovi and Hillary Clinton." (His father was Greenwich Village historian, poet and author Stefan Brecht.)

We don't have any further details on the business at the moment. The space was previously home to Bond Street Chocolate for seven years.
Posted by Grieve at 4:00 AM

The other night I was walking home and took 9th St from 2nd heading to Ave A, and I thought the EV looks very much the way GV looked 30-40 years ago with all the little privately owned shops selling things you can get nowhere else. Has anyone been down Bleecker street lately?

wow, i have had obsessive chocolate disorder since the election.

knowing it is a formal diagnosis makes me feel less alone.

looking forward to checking this place out.

No it isn't, but there's also a company in California called Obsessive Confection Disorder and a cosmetics store near here called Obsessive Compulsive Cosmetics, and I'm sure many more companies that make a play on those initials. If it's not trademarked, it's fair game.