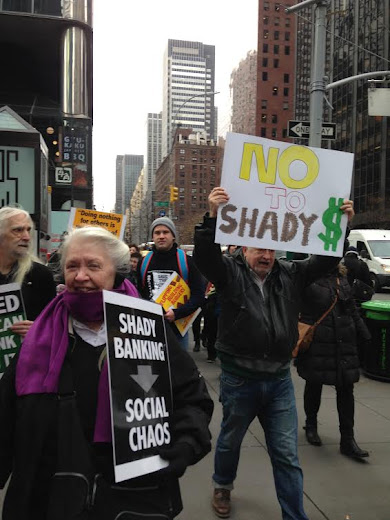 Tenants of more than 20 buildings owned by Raphael Toledano, along with local elected officials and community organizers, went to Midtown to call out Madison Realty Capital and Signature Bank for their role in lending money to the controversial landlord. 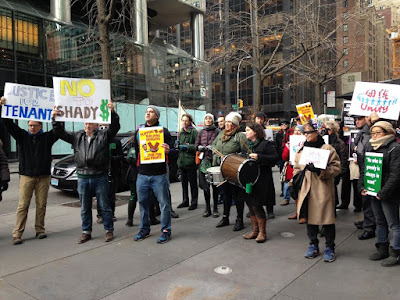 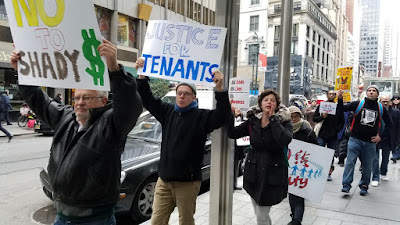 Here's part of a statement issued via the Cooper Square Committee:

In September of 2015, Madison Realty Capital, a determined private equity lender, issued Toledano a $124 mil mortgage to buy 17 buildings throughout the East Village and Chelsea area.

News coverage (The Real Deal) has documented the risky lending patterns that Madison Realty Capital maintains. The Real Deal quoted a veteran real estate investor saying that MRC’s $124 million loan to Toledano left him “over leveraged,” and that Toledano is now “pushing up rents to pay off a high mortgage.”

The mortgages Madison Realty Capital issued Toledano went as far as to require him to spend $2 mil of the loan exclusively on tenant buyouts or renovations – practices which often trigger huge rent increases. Tenants in Toledano’s buildings have faced alleged harassment and extensive building issues ever since he took ownership. Signature Bank played a role here as well, as they collateralize Madison Realty Capital in the lending they do. 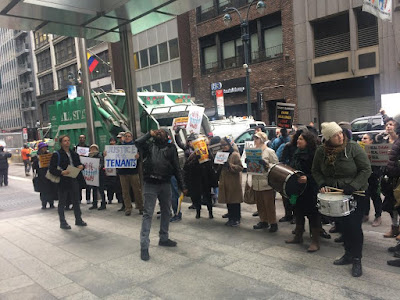 And here are prepared statements from elected local officials...

State Assemblymember Deborah Glick: “Raphael Toledano has proven to be an unscrupulous and harassing landlord who takes financial risks and is often over-leveraged while seeking to make an enormous short-term profit off a group of buildings at the expense of tenant’s rights. Madison Realty Capital, and their collateralized backer, Signature Bank, show a disregard for stable communities by funding these mortgages for Toledano. We urge them to stop funding these projects which inevitably result in tenant harassment."

State Sen. Brad Hoylman: "Madison Realty needs to take responsibility for the unscrupulous, anti-tenant actions of the developers it bankrolls. Madison is greasing the skids for predatory landlords in my district who systematically harass tenants out of their homes. I’m proud to stand with the Toledano Tenants Coalition, Cooper Square Committee, and the Rude Mechanical Orchestra in calling on Madison Realty to pull the plug on Brookhill Properties."

Toledano is reportedly trying to sell a large number of his East Village properties.

Photos courtesy of the Cooper Square Committee
Posted by Grieve at 4:15 AM

Typical ineffectual statement by Deborah Glick. "We urge." Has she no power to ask the State Attorney General to start an investigation? Has she no power in Albany after all the long years of her service there to at least have a committee investigation? She was reelected with no opposition. It is time for her to start playing a more forthright part in tenant's rights and in efforts to protect the lives of working class people in the EV / LES

Mortgage agreements which basically require owners to push tenants out of rent stabilized housing should be illegal. This is culture capitalism at its worst. Why don't the local politicians look into these kinds of mortgage agreements if they really want to save affordable housing? On top of trying to push tenants out with buyouts and renovations, Toledano is clearly overleveraged and is suddenly trying to unload the properties, bringing more instability to these tenants.

One man -- Craig Smith -- gave a succinct and inspired explanation of what the protest was about. Smith has been targeted by Toledano in a lawsuit over the Smith-Stone family's right to live in their rent-stabilized apartment:

Thank you Anon@12.23 for the information about the AG's investigation and other investigations. The more investigations the more likely that information will continue to be brought forward about the corrupt practices of landlords and the real estate industry. I understand the frustration of Anon@1158 AM with Deborah Glick and indeed with many of our elected (yes with no contest) officials. I am an independent voter, but let's face it the Democrat Party has a weak bench of potential leaders. In part this is because we keep returning the same people to positions. Yes, they often have good staff outreach, but let's face it most of them are now comfortably elected for life--just waiting for the next sinecure to open up for them. They will never aspire to higher elected office in the state or the city. I am , as I am sure others are, disappointed by De Blasio. Never forget Rivington Street and the sleight of hand with emails.