Salon Seven exiting 7th Street at the end of the month 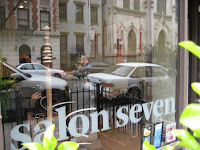 A few weeks ago, we noted that the two storefronts at 110 E. Seventh St. were for rent. One of the businesses here, Porchetta, has closed while its owners look for a new space. Next door, Salon Seven remained open here between Avenue A and First Avenue.

However, longtime Salon Seven proprietor Mark D. has announced that he is leaving the space, closing on Dec. 31.

Per a message to patrons:

It has been a great privilege to have been a part of your lives for nearly 20 years at Salon Seven. Thank you for your patronage and loyalty ... I will be moving to a nearby location effective January 6, 2017. My new digs will be at the Tim Dark Hair Salon, located at 27 East 3rd Street where I will continue cutting your hair as usual...