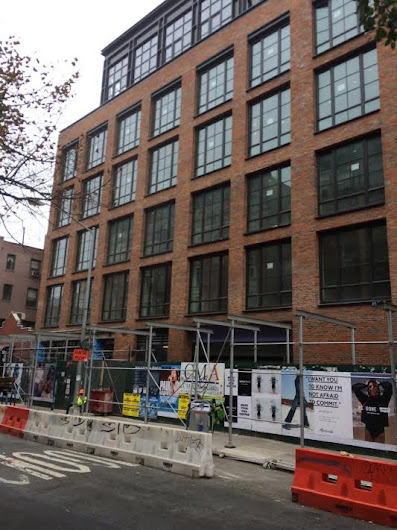 We thought that the remaining scaffolding and sidewalk bridge would then soon come down on Avenue A and 11th Street, though that hasn't been the case so far.

So we'll go with what we have — a view of Stei Town's main entrance and private garage... 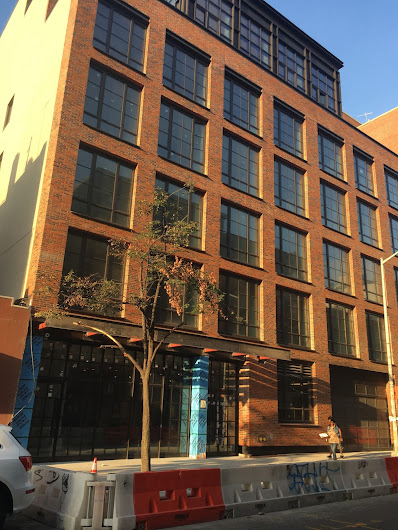 If this helps finding the garage... 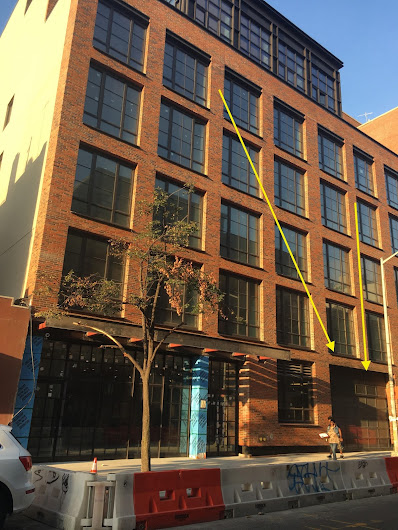 Last we saw, more than half of the 82 units were sold (that was a July report). The Steiner website currently shows eight available units.

Lastly, a look at Steinerburg Saturday morning from 12th Street... 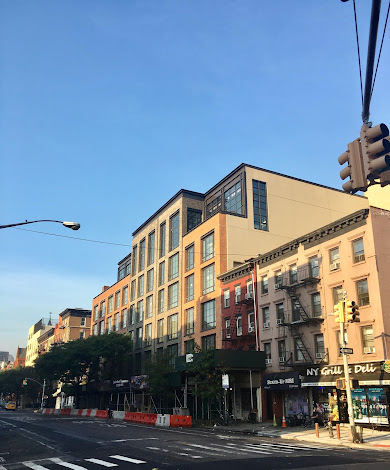 An update on Steiner East Village, 'Usherer of Alphabet City Gentrification'
Posted by Grieve at 4:00 AM

The lobby was completely covered with poster board and duct tape during the day and taken down at night. I am unsure of what this practice is for but I like to be ungenerous to the benefit of the doubt and think it was to do quick illegal sans permit work. At the end of the day the poster board would come down, the next day it would go back up. Carried on for a few days.

In truth, it is a nice building, but the divide between the have's and the have not's and what the pricing represents down to the homeless people camped out all construction under the scaffolding is unsettling. This whole process has been one bad analogy.

I too thought the garage doors on 12th street were the entrance to, well a garage however look looked in one day recently and noticed a cinder block wall about 15 feet back from the entrance. Perhaps it will be removed when the building is closer to completion but for now I am puzzeled by what I saw.

It's a very handsome building. The prices are not outrageous for the condo market. And the best part, it won't attract a hoard of frat-rats to the nabe. The down side to Steiner's success is that it might encourage other builders to snap up small rental buildings and rebuild them as condos. Not good.

Who are all these mega-rich people?

Everybody diverts to the fratties. That's what they want. This is a million times worse. The property values will raise. Eventually the frattie rentals will be demolished and replaced by lux housing. I think this is the most detrimental building so far. It's an eyesore.

Why would anyone pay $1 million to live on a second floor overlooking a busy street and a 7/11? Same goes for that place on 2nd Ave & 1st St. Fools and money.

There are lots of reasons not to be thrilled about condos coming to this corner but honestly the building could be a LOT uglier. I consider it a bullet dodged.

What building are you looking at? Because this thing is ugly and way out of proportion with the surrounding structures.

The loss a empty and shuttered Catholic school a run down shambles of a rectory a church with just about no parishioners and last but not least a asphalt parking lot that weekends became a flea market hawking junk.