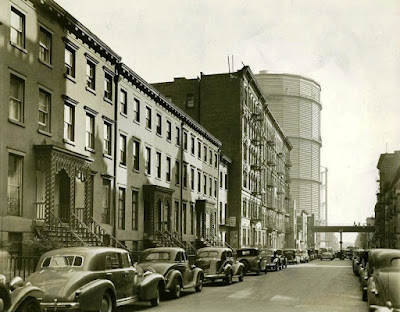 As you might know, the current home of Stuy Town/Peter Cooper Village was once the Gas House District in the late 19th century and early 20th century. The area was named for the Manufactured Gas Plant (MGP) stations and facilities that converted coal and oil into gas. Con Ed and its predecessors ran the stations. (Read more background here and here.)

Here's a map circa 1897 showing the area when Avenue A (yellow arrow) and Avenue B (blue arrow) crossed north of 14th Street. (Threw in a black arrow for Avenue C too.) 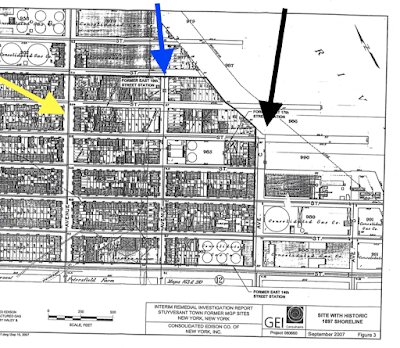 As Ephemeral New York has posted, by the 1930s, most of the storage tanks were gone.

According to the study’s findings from investigations in 2006 and 2008, contaminants were found, but located deep in the ground (at least five feet) with most even lower, and in groundwater beneath the site, though that water is not used for drinking. MGP residential levels tested in the air indoors were found to be typical. Outdoor air samples collected were also found to be normal for an urban area. Because of this, Con Ed said in an advisory this week that it’s unlikely people will come into contact with these contaminants, though air monitoring will continue.

Still, the company is now proposing a “remediation” (cleanup) plan for the site that involves, among other things, the placement of wells.

The Stuyvesant Town/Peter Cooper Village Tenants Association and Con Edison are holding a public meeting tomorrow night at 7 to discuss the cleanup plans. The meeting is at Mount Sinai Beth Israel’s Podell Auditorium in the Bernstein Building, 10 Perlman Place, one block west of First Avenue between 15th Street and 16th Street.

In addition, the State Department of Environmental Conservation is accepting public comments in writing Nov. 10. You may submit those to Douglas MacNeal, project manager at the DEC, at douglas.macneal@dec.ny.gov or 625 Broadway, Albany, NY, 12233.

Why now? Is Con Ed hoping to tap into more superfund money, now that they have gotten a taste of several million in remediation after Sandy -- simply for waiting and doing nothing.

Either Con Ed has an in on some free federal money, or, they are doing this out of 'niceness', to paid for with a rate increase.

ConEd's investigation and research into remediation of this issue pre dates Sandy. I know this because they did soil testing and air monitoring of my building, and I moved out of StuyTown after that, but before Sandy.

Our buidling recently found out that the water table under Manhattan may be rising due to climate change, causing water to come up more frequently in our basement. We now have constant floods from water rising under the building, and have had to install more pumps. The problem has gotten worse since Sandy. If this is true the toxic material in the ground under StuyTown could also soon be coming up into their basements, which would put the kibbiish on the grand plans to turn StuyTown into luxury housing.

If this is true the toxic material in the ground under StuyTown could also soon be coming up into their basements, which would put the kibbiish [sic] on the grand plans to turn StuyTown into luxury housing

Wait—I thought StuyTown™ was already luxury housing? Or does this refer to a plan to kick out all the remaining rent-control and -stabilization tenants for once and for all?

Or, would the luxury plans be to raze the current StuyTown™—fortunately not landmarked—in order to put up some truly post-modern monstrosities? The plot thickens!

In that case, Option 3 is probably the best and easiest course of action.