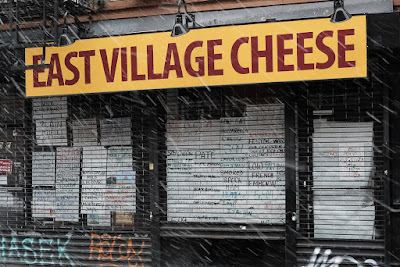 East Village Cheese Shop has not been open since Thursday here on Seventh Street between First Avenue and Second Avenue, prompting concern from its patrons.

There isn't any sign on the door about any type of closure. The shop doesn't have any social media presence to speak of (a Facebook page still lists their Third Avenue address that they left in 2015). The phone is also out of service.

East Village Cheese moved here from Third Avenue in September 2015. By April 2016, regulars started worrying about the shop's longterm financial health. (See this post.) The place never seemed too busy. There were other quibbles, such as being cash only, the lack of evening hours (they now close at 6:30) and the lack of ambiance (one reader suggested they pipe in some classical music).

Several EVG readers emailed me about the shop's gate being down since Friday. Per EVG regular cmarrtyy:

Can't say I'm shocked if they went out of business. The store was empty or near empty when I was there. And they were also down to one employee — cutting cheese and working the checkout. Seventh Street is not Third Avenue. There's very little foot traffic ... Sad, if they have closed for good.

Hopefully that's not the case... and this is just temporary.

Looking at the incoming East Village Cheese shop on East 7th Street
Posted by Grieve at 4:30 AM

we shop there often---noticed---vibe AFTER move from upbeat/vibrant to indifferent/morose....
too bad (great stuff at very competitive prices)
shop owners enter the EV with lofty expectations and are quickly disillusioned
i believe the EV is a very complex market (poor foot traffic/small working class base/very intuitive and sensitive clientele)
ps note to shop owners: if you're coming to the EV to 'make a bucket load of money' and treat us with a casual/dismissive/condescending attitude we have a bucket load of statistics that show a 90% failure rate !

The single fault this company had was not accepting plastic. Look around the neighborhood only people over 50 still use cash and there are less and less old timers (myself included) walking around in 2017. We live in a crazy consumer society where every vendor makes it as easy as possible to for customers to purchase their wares and services. I am very sorry to see this shop go although I buy very little cheese it was a great place to have nearby when I did.

A couple of weeks back, I bolted there after getting off the train to get something. They had closed early and we ('cause there were two other people who had done the same thing and we were begging the guy to let us purchase) learned there was a member of his family who was dying and he had to leave. I just came back the next evening.

Some times there are two people behind the counter, some times only one when I go in. I'm never there with just me.

I do think that East 7th wasn't the best location for them; but, it is rough being a small business owner when family things happen.

I hope everyone is ok.

They would have been much better off if they had moved to 2nd ave near st marks if they wanted foot traffic. This reminds me of the move St Marks Books made that killed them as well.

That open fridge in there is terrible

In my dreams, this shop would relocate to the Avenue A space vacated by Empire Biscuit because it would be close to me! It would probably be better for them too to be on a main avenue.

I'm glad I'm not the only one that noticed the quality issue. I went in there once and not only got ignored, but felt that the cheese wasn't being properly stored. The "cold" fridge that is open wasn't particularly cold and it did not smell like good cheese (and I like stinky cheese!).

I shop there every year for my tree-trimming party and was in a mild state of shock when I passed by on Friday afternoon and they were closed. Luckily I had already bought some excellent cheese at Di Palo's, but I was looking forward to one of those jumbo wheels of bargain brie!

unfortunately the quality of their wares has been going down for about ten years now (the length of time ive been shopping there).

it used to be a near weekly stop because you would run into outstanding deals (e.g., manchego for $10/lb or less) and they could give the ukranian butcher on 2nd a run for their money on good cold cuts (again, prosciutto for $10/lb or less). they had good deals on coffee too.

sad because at one time, again, it was a place i stopped by weekly to do some shopping. went to the 7th st location a few times to see if maybe they were able to improve their wares and business model. sadly, haven't visited in more than a year because there was never anything there worth going out of the way for.

The quality of the cheese being sold hasn't been the best since the original owners sold it to some of the employees many years ago. I continued going there for a few more times just for their hickory smoked tuna salad which was delicious but got annoyed with dealing their poor customer service and rude behavior. I looked in once they moved to 7th street and thought it looked cramped and dirty. I buy cheese occasionally from the Bardwell Farm stand at Union Sq Market, pricey but excellent artisanal cheeses.

yes crazy they did not relocate to an avenue

Loved this place and shopped there monthly at least in old location, to be honest had forgotten they still existed since move. Side street that Far East was never going to work in general (as has been said was equally problematic for SMB) and completely out of the way for me during their open hours. I do, however, walk that block late night to and from Avenue A restaurants and have never even noticed their signage which may be a telling issue. Also might point out that Garden of Eden on 14th Street and Westside Market Third Ave have cheese selections nearly as good as the old Village Cheese neither of which existed when VC was in its prime. So for that matter does Agata and Valentina although more expensive.

Afbp writes:
"shop owners enter the EV with lofty expectations and are quickly disillusioned
i believe the EV is a very complex market (poor foot traffic/small working class base/very intuitive and sensitive clientele)
ps note to shop owners: if you're coming to the EV to 'make a bucket load of money' and treat us with a casual/dismissive/condescending attitude we have a bucket load of statistics that show a 90% failure rate !"

As a general statement AFbp is right, however, the Tibetan owners of East Village Cheese, who had begun as workers in the shop, were not neophytes to the business nor to the East Village and its community. I don't know all the dynamics of what happened in the last few years at 3rd Avenue, but like others on this thread, and on previous threads when the departure from 3rd Avenue was being discussed, I found the quality of the cheese had declined--some of it was clearly bought at a discount because the cheese had passed its prime. It never bothered me that they were a cash only store nor that they closed at 6 PM (they should have tried to stay open later). I think part of the death knell was (a) people's awareness of good cheeses from small producers grew over the years, (b)cheese became expensive and (c) markets like Westside Market were offering a vast variety of cheeses and many at highly competitive prices. Sad to see these people falling on hard times.

I believe that the Health Department might have something to do with the closure. I went there one day last week and was met with a "closed" sign however, there was someone inside (not a staff member) taking notes. It seemed like he was testing the temperature of the cheeses and the refrigerators. Not surprising. Recently they have sold me more than one cheese that turned out to be unpleasantly past its' prime.

"The single fault this company had was not accepting plastic. Look around the neighborhood only people over 50 still use cash" - December 11, 2017 at 8:36 AM

Yes, you're right, it would've been helpful for them to accept plastic as well.

By not accepting credit cards tho, EV Cheese avoiding a fee that dips into their tiny establishment and it also seemed to help preserve some kind of human-to-human physical exchange.

I will miss them!

If 11:37 is right, then there's a chance they'll reopen after they get the refrigerators fixed.

Only thing is that their non-cheese stock had been dwindling for a while, so maybe they were having trouble paying their suppliers.

For all their faults, you could get some really good deals there. Sigh.

Very sad to see this. Now where will I get my country pâté and my port wine cheddar and my Double Gloucester and my olive bread? But y'all are right about the slightly grimy aura and the less than fresh products. Maybe West Side Market is the way forward.

The place starteed going downhill a while before they moved to 7th. The quality of the prepared food went from excellent to mediocre and the service went from great to absolute crap. Not accepting plastic is a death sentance also these days. The demise was inevitable.

I’m sending my best wishes to the east village cheese folks. Cash was fine with me and the broken cracker bargains and Turkish yogurt and goat Gouda couldn’t be beat. Some cheeses were past prime and the herring and taramasalata were sometimes a bit tired, but the service was always pleasant . I hope they come back soon, and take care about selling any cheeses that will disappoint.

Hope that the closure is temporary. I was a regular at the Third Avenue location-right on my way to work. Sadly, the new out-of-the-way location and limited hours made me a very occasional patron of the East 7th storefront. I have had only the most pleasant interactions with staff there, though I wouldn't blame anyone if they had become morose at seeing their previously-bustling business dwindle.