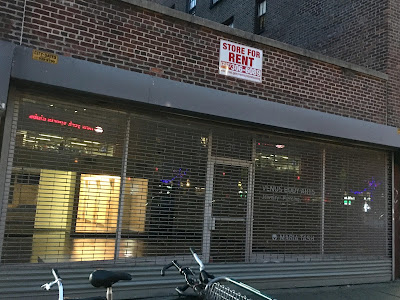 Venus Body Arts recently cleared out of its 4-year-old home at 31 Avenue A between Second Street and Third Street.

And the listing for the storefront owned by the NYCHA arrived on the market yesterday. (The photo in the listing shows the wrong space.) Asking rent is $90 a square foot.

As for Venus Body Arts, owner Maria Tash, whose clients have included Scarlett Johansson, Beyoncé and FKA Twigs, first got her start in a Fourth Street studio in 1992. She moved the jewelry, tattoo and clothing boutique to this storefront in 2013. The locations on Broadway and in London remain open.
Posted by Grieve at 4:00 AM

Email ThisBlogThis!Share to TwitterShare to FacebookShare to Pinterest
Labels: Avenue A, for rent, Venus Body Arts