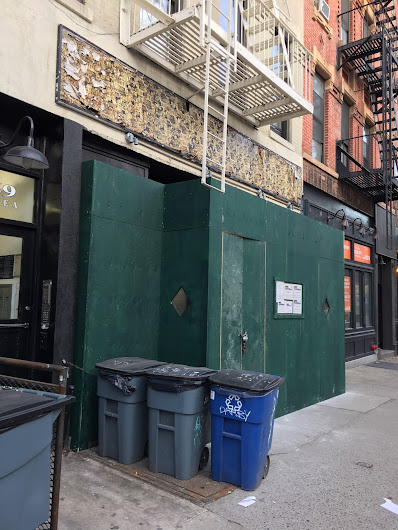 Work continues at the former HiFi space on Avenue A between 10th Street and 11th Street.

Not a lot is known publicly about the new venture just yet. However, the place does have a name — Coney Island Baby... not to mention an Instragram account, which I discovered last evening...

In his closing announcement, HiFi co-owner Mike Stuto wrote that business had been off, noting that the weekend bar crowd was "mostly indifferent to the place." He also stressed that the closure had nothing to do with the landlord, a management company that he said has been "ideal ... in pretty much every sense of the word."

Stayed tuned for more on Coney Island Baby, which presumably is named after (or for!) this. Or this! No word on an opening date just yet.

The bar's website is live now. Coney Island Baby describes itself as "a new 200 capacity live music venue and bar in the heart of the musically historic East Village in NYC. Booking now."

Alejandro Escovedo is headlining the first show on May 2.

Ok reading far too much into this, but:

This place really wants to be a music venue.

Weird. That's the name of our upcoming album. Old old song. The old tune is not about Coney Island in NYC at all.

It sounds to me like it's going to be part of the Johnny T "franchise", ala Berlin, etc.

Glad to hear its being redone into something new. I loved HiFi and miss it all the time. Hopefully this will be a great rebirth!

Well, what "song" are we talking about? Because the original "Coney Island Baby", a doo wop style number from 1962 WAS about THE Coney Island and the group that recorded it was from Brooklyn. John Kuse and the Excellents were the guys. And the girl being serenaded was obviously a local. John still fronts the group, they still play the NYC area and they are well worth seeing. LONG LIVE BROOKLYN DOO WOP!

We do Goodbye My CIB by the Mckiney Brothers. From the 20's. Taken from an older version from maybe 1912 or earlier..I think the bar is named after the Reed album but if you walk in and they have 50's decor then I guess they like doo wop.
If a barber shop quartet greets you at the door then I guess they like older music!
https://youtu.be/xMCsk9dOqJo