'God' willing, this CBS pilot will be filming on Avenue C the next 2 days 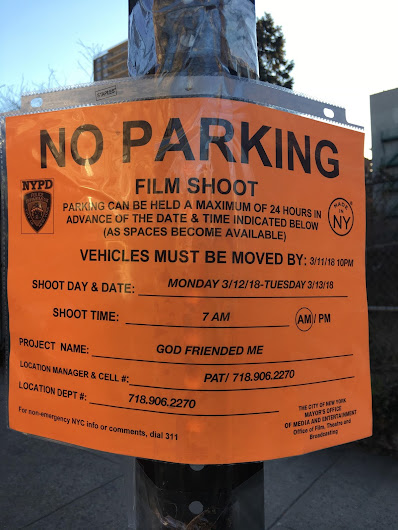 Crews for a CBS pilot called "God Friended Me" will be filming on parts of Avenue C and Avenue D between Eighth Street and 13th Street tomorrow and Tuesday... 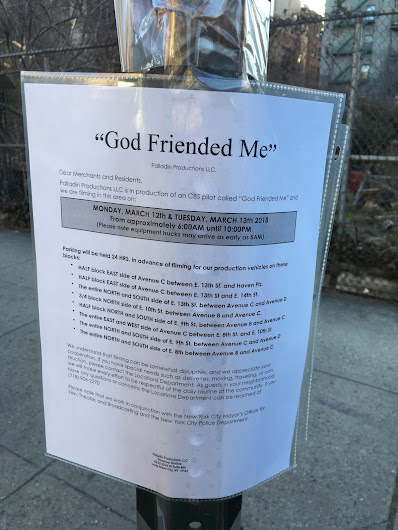 Here's the plot via Deadline Hollywood:

"God Friended Me" is described as a humorous, uplifting series that explores questions of faith, existence and science. It centers on Miles (Brandon Micheal Hall), an outspoken atheist whose life is turned upside down when he is “friended” by God on Facebook. Unwittingly, he becomes an agent of change in the lives and destinies of others around him.

Violett Beane will play Cara Weiss. Confident, compelling and quick-witted, Cara is a leading writer at an online magazine. Under pressure for her next big story, her life takes an interesting turn when she meets Miles — thanks to God’s friend suggestion. The cast also includes Suraj Sharma, Javicia Leslie and Joe Morton.

Why in 'God''s name would CBS order this pilot?
Posted by Grieve at 9:31 AM

All these concept comedies...God, I mean, who laughs at concepts outside of a network executive and their bankers? No wonder viewers turn to cable or oxy... whichever is more readily available.

You know that Facebook’s days are over when CBS is making a sitcom about God friending you. Teens are abandoning Facebook in droves, many have never even joined. Users overall are spending less time on Facebook as more studies show its negative social effects from online bullying, plus all the fake news and trolling that goes on. Sorry CBS, even God doesn't use Facebook anymore.

Social media influenced dungheap. Brought to you by generous tax abatements from the state to shoot shitty TV shows in the city. GTFOH

Sounds like the new Touched By An Angel, or heaven forbid, Dear God.

It sounds eminently miss-able. Unless, wait, we all know God's pronouncements are a hoot and a half, so will He get His own laugh track?