The former Sunshine Cinema will be demolished in 2 months 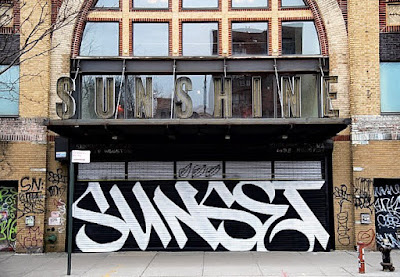 [Photo from last month via @michaelkbusch]

The Commercial Observer has a Q&A with Gregory Kraut, a managing partner at K Property Group, the newish owners of 143 E. Houston St. — the former Sunshine Cinema.

Kraut offers a few details on why the property was of interest ... and when they plan on tearing down the structure built in 1898.

Here's part of the interview with a passage on the Sunshine:

Why did you want the Sunshine Cinema building?

Because we saw where retail is going. We saw what was happening on Orchard Street where they have Equinox, CVS and T.J. Maxx, and Whole Foods was on the other side so we’re right there. We’re like, Are you kidding? This is a great location. We’re putting up a spec 63,000-square-foot office building that’s going to be nine stories. Roger Ferris is our architect. He is awesome.

So no theater there.

No theater. Zero. We’re demolishing it in two months.

No, not at all. First of all they were trying for years to make money and they couldn’t. The area has changed, and quite frankly, the business model didn’t, and so we gave them options to renew. They had several opportunities to buy the building.

East End Capital and K Property Group bought the building for $31.5 million last spring. They filed demolition permits to take down the three-level structure here between Eldridge and Forsyth back in November.

The new building permits — a 9-story boutique office complex with a retail component — haven't been posted just yet at the DOB.

The five-screen Sunshine Cinema closed on Jan. 21 after a 17-year run.

A celebratory ad on the purchase of 139 E. Houston St., current home of the Sunshine Cinema
Posted by Grieve at 4:00 AM

Building a spec office building in this location is insane and this guy sounds like such an asshole.

Notice how the subject of the buildings architectural relevance never came up. If anyone doubts that Whole Foods is not the tip of the gentrification sword then what more proof do you need.

A bunch of crummy news this morning!!!!

I know they are technically humans, but I can't seem to relate much.

citing CVS as a good thing? dios mio. i think it is a john le carre quote, or one of his character's quotes... "people will let you down" ... : / they sure will

I took this photo of nearby Orchard St back in 2007:

It's a fake billboard and is part of a film set, but it pretty much reflects what is going on here now. I still get sick to my stomach looking at the photo and wonder of developers get their ideas from things like this.

And FWIW, there is no TJ Maxx in the area.

Sad for the EV is the trend of builders putting up boutique office buildings for a single client or possibly a shared work space. Our real estate is relatively cheap and CB3 and our politicians are worthless.

I remember walking past the building many, many times pre-Sunshine, and the breathtaking glimpse I once got of the hollowed-out interior as renovations began. It was maybe the largest indoor space I ever saw in Manhattan, just gigantic, dug out down to the sub-basement level.

Such a great exterior. But history doesn't mean anything anymore...

The cinema was not hurting. So this dude is wrong. CB3 denied the liquor license, and so paved the way foe the purchase, and then eviction. Someone on CB3 -- maybe all of them -- got some kick back. Maybe even De Blasio.

This would have been an enjoyable place, much like Metrograph, but possibly not as expensive. And with the original architecture intact.

@1:28. If you have any information to support your allegation about bribery, you should contact the NYC Dept. of Investigation. Otherwise your repetive accusations are tiresome.

"Otherwise your repetive accusations are tiresome."
LOL Who are you, Dr. Evil??