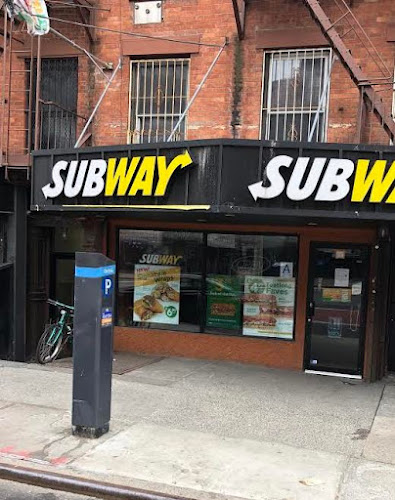 The Subway (sandwich shop) on First Avenue between Sixth Street and Seventh Street remains closed... this after the Marshal came calling late last week, putting the storefront in the legal possession of the landlord... 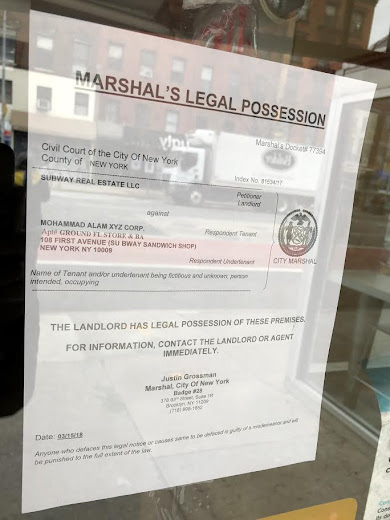 If this shutter remains permanent, then this marks the seventh Subway sandwich shop to close in the immediate area in the past five-plus years, joining the one on the Bowery … East 14th Street … First Avenue … Second Avenue… Third Avenue ... and Fourth Avenue.

Subway fans still have the locations at 250 E. Houston St. and 223 Avenue B to choose from, among several others close by. 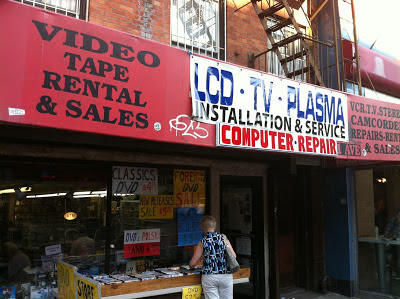 Previously on EV Grieve:
The 75-cent coffee at Subway

Subway is disgusting. Meaning the food. It has absolutely no taste. Even the dressings. It's like chewing air.

I thought I saw a customer in there once but it turned out to be one of the employees.

was they on the phone??
lol

I'd rather eat an old shoe from Tompkins Square Park than anything from Subway. Bring back the video place!!!

The only thing keeping the Subway on Avenue B afloat is the ever-present construction crews working between Aves. A and C, who are also to be found populating the Domino's on 14th and A even though Muzzarella's far superior product is just right around the corner. Once they crews are gone, we'll see how long the Subway, at least, remains in business.

And now, the one on Third Avenue between 15th and 16th has closed, its interior gutted and one sign pried off (another remains). The cleaners next door closed, too; they put a sign in the window telling people, at least.

That stretch of Third Avenue is tough: walk south, and it's the ghost of the paper supply house; the zombie construction site (six years now with the sidewalk shed!). Across 14th, one sees the shell left by the bank, then the former beauty supply/seasonal costume retailer a few doors down. Thank goodness for mattresses!

Anyway, over the last decade, the sandwich shop went through several franchisees: one just vanished, seemingly, and another got seized by the state for tax issues. The misfortune there: they emptied the space of people and left the food to spoil. About six weeks later, a crew came in and the smell coming out was awful.

How the Mother Ship found more people willing to take on what must have been one of the bigger shops in NYC on a square footage basis mystifies. Just walk by and do the math: how many sandwiches does one have to sell to begin paying rent and tribute to the Mother Ship? Don't think about it too much on your way; it's all in the past now.