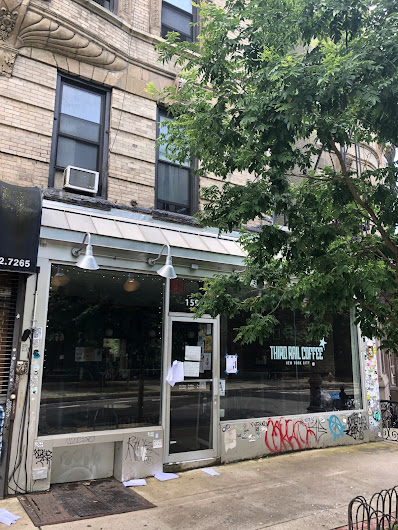 An EVG reader points us to legal documents on the door at Third Rail Coffee on 10th Street just west of Second Avenue ... there is a Notice of Termination... 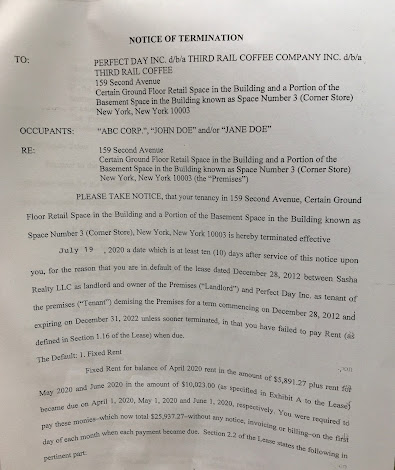 The paperwork states that rent is due for April, May and June on the storefront, an amount that totals nearly $26,000. Third Rail Coffee had closed at the start of the NY PAUSE in March.

Not sure how all this might play out: Gov. Cuomo announced in May that he had extended the state’s eviction moratorium through August, though critics have said the new version of the order is weaker, and favors landlords.

[T]enant and housing advocacy groups say the fine print of that order will allow for eviction proceedings to move forward through the New York courts e-filing system, increasing the burden of proof on tenants to show they could not pay rent because of COVID-19 related financial hardship.

Meanwhile, in other coffee-related news, Future You Cafe is officially closed on Seventh Street between Avenue A and First Avenue... 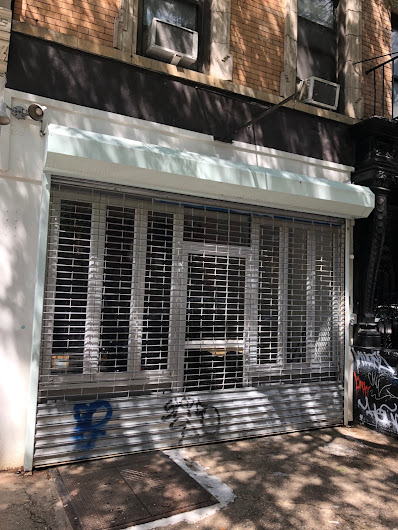 Owner Roberto Levinson, who opened the shop here in November 2018, announced the decision to close at the end of May on Instagram.

As the economy is slowly reopening, I have taken a lot of time to carefully assess the current situation, including the health risks involved, as well as the economic hardships most businesses in our industry are going through. After carefully deliberating for weeks, it is with great sadness I must announce our decision not to reopen.

I am sorry to hear this sad news. Both were unique locations. This is not surprising however. Unfortunately, this is just the beginning of what is to come. I spent over twenty years in hospitality as a waiter, bartender, manager, and consultant. Unless you have consistent foot traffic and revenue on a daily basis to uphold costs, labor, product, and taxes, what is the point in opening up something unless you have money to waste? I have worked in several places and with many business owners in Manhattan during the early 2000s to the late 2010s that have now vanished. I apologize for sounding cynical. I just have seen so much disappointment and turmoil. People who put their hearts, souls and every last penny into their places. They eventually folded up because they couldn't afford the expenses. Many I knew resorted to bankruptcy. These small venues just don't have the chance to evolve or the resources and capital to sustain what was an already broken economy before the pandemic not to mention the current lockdown restrctions we are forced to live with. How can we learn and grow from these closures? Perhaps we need to reshape our expectations and focus when it pertains to a business venture. Perhaps less coffee houses and shops is a good thing. Even less restaurants and bars too. A reset. The landscape of retail and dining out is going in a very different direction that some might not embrace. Before COVID, we had numerous options which meant massive competition for other merchants. I really want small businesses to flourish and thrive in our neighborhoods, but I just don't know how it will look now with looming uncertainty. At the end of the day, everything is and will always be about money. Regardless if I had adequate savings to withdraw upon to open a place, I wouldn't do it. Too much stress, anxiety, pressure, and responsibility to endure. My best to these business owners and former employees.

$26,000 in outstanding rent? How are they supposed to pay that during this pandemic which has devastated small businesses all across this City? Most places are barely making 25% of the revenue they need from curbside takeout orders. As I walk around the LES/EV I see a lot of small businesses closed and they look like they will never reopen which will leave us with mostly corporate chains like Starbucks, Dunkin Donuts and MacDonald's which is a sad future for NYC.

It seems to me that coffee shops in the East Village are in the business of renting tables and chairs.
Wouldn't they do better to include great and affordable baked goods, sandwiches, quiches, crepes, etc? The Bean tries. Starbucks tries and fails. 9th St. coffee has a sad collection of baked goods but their coffee has always been tops so maybe they don't need the extra income...

Exodus out of NYC continues.

Living in a debt society is fun for you rentiers, you get to have servants like uber and adult men on bike deliver a sandwich, but the debt must be serviced and none of the landlords actually own a building, they own a mortgage and service their debt. If the City starts "bailing out" restaurants, they are actually servicing bankster debt. The expropriation of our sidewalks and gutters is a direct service to the debt of the banksters. And the City certainly isn't lowering taxes and water bills etc. My company has to pay $4 million dollars a month for an empty space, and the City is STILL taxing our rent on the commercial rent tax, for a space they won't let us use! And our mayor is obsessed with painting big letters on a street.

So my question for the Third Rail Coffee landlord: the city, and the country, is unfortunately going to be stuck in a place between barely open and not open for the foreseeable future - best case scenario is we’re like this for another nine months, minimum, with takeout, delivery, and a couple of curbside tables while the weather isn’t too cold.

In this business environment, is it better to force out an existing tenant who has already built out the space and has a track record of staying in business for years (pre-pandemic), or is it better to wait for another tenant who has to put even more capital into building out a new space, only to try and survive in this business environment for the next year?

Frankly, I don’t think I’d trust a tenant who thinks he can be successful opening up right now. I’d rather try to negotiate with the current tenant, try to cover costs for the time being, and see what happens next spring. But hey, that’s just someone who’s worked in risk for nearly a decade’s opinion.

Besides the obvious pro-realestate commenter these are all valid points. I had no idea that space as small as Third Rail was paying $12,000 per month. How many cups of coffee and baked goods each day are needed to cover rent, wages, food costs, electric, etc...?
Now that nearly all the buildings in Manhattan are owned by large corporate landlords the time of small businesses is officially over. We have seen in recent years the failure of chain restaurants to stay afloat with a few exceptions. However small retail spaces which the neighborhood has heaps of depends on entrepreneurs opening their businesses which is highly unlikely to happen this, next or the next few years. The lack of vision in a city and state government in regards to landlord monopolies has brought us to this point. The pandemic just sped up the process by a few years. The next wave of exists will be from tenants in market rate apartments, I've already seen it happening on my block as the sidewalks were piled sky high the millennial furniture.

@noble neolani - Same same, I was out and about the past few days and could have re-furnished my apartment from scratch from all the discarded furniture, books, kitchenware etc. Yeah I know the end of the month, when people traditionally move, results in some detritus left behind on the sidewalk, but I've never seen anything like this. This is a wholesale fleeing.

I'm very happy to see so many people fleeing NYC permanently! I hope it dramatically changes this city forever.

Which “rentiers” are you referring to? Somebody living on 6 basis points of yield on their bond portfolios? A little off topic. Wasn’t sure who your straw man was, though I agree with the rest of your thesis

I second that. That's NYC's only chance for some salvation of becoming just another Midwest city.

Bare in mind, end of June is always pick time for moving out. By September we'll see if they're moving back in or not. But it definitely looks like those kids who haven't escaped already in the last 3 months, are doing so now.
I do some work in Turtle Bay, which used to be a senior citizen community, and have turned into post grad millennial town. The U-Hauls, accompanied by dads carrying millennial furniture, are everywhere for weeks now. Just one advice about re furnishing ,the stuff you see on Midtown East sidewalks is way way higher quality than East Village junk.

EVG, the eviction moratorium you have mentioned was just until August 20th, not the end of August. And you might have missed how it was extended indefinitely, until the end of the emergency order, and until all and any restrictions are lifted. Coumo had signed it on June 30th in the evening. And since we know that live performances will be the last to come back, and we know that won't happen before January, and possibly even as late as next April, so practically there are no evictions this year.

Commercial property has no market value right now. If the current tenants all moved out, no one would move in. Therefore it makes no economic sense for landlords to expect tenants to pay restaurant rent for space that is only being used as storage.

Landlords have mortgages. The banks should allow them to postpone mortgage payments until they start getting rent again, and extend their loan period with no interest for the nonpayment period.

Then the banks should take the hit. We bailed them out with our tax money in 2008. Isn't it time for them to pay back
some of what they owe?

And since all the money everyone else is losing is being vacuumed up by billionaires, of course they should be subject to windfall taxes now.

Wish we could DEFUND REAL ESTATE MAGNATES, the largest political donors in NY state. Predatory capitalism has devastated this city. Stop the super pacs and campaign donations (looking at you real estate and police unions) then politicians could work for the people, not be the lackeys of those who donate the most money. Systemic change is needed, obviously, and is finally being fought for. Vive la révolution!

Appreciate the perspective of the first anonymous comment (JULY 2, 2020 AT 9:09 AM) and would like to continue the conversation: info@evccnyc.org

Unfortunately, the eviction notice clearly states that rent and taxes were not paid in 2019--BEFORE THE COVID SHUTDOWN--so it's not quite the rent situation that people have brought up. Given that, I wish Third Rail had made those facts clear before asking for funds for its staff.