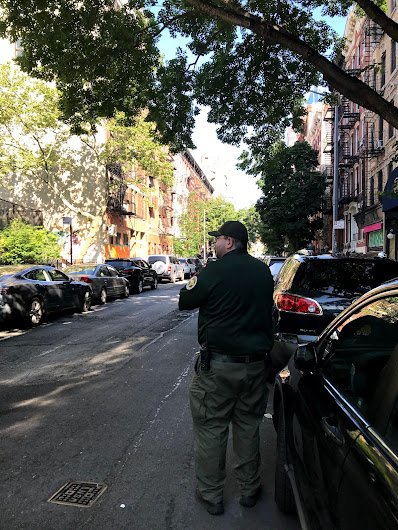 An EVG reader sends along this story of an interaction with a Department of Sanitation officer this morning.

Alternate Side Parking regulations went back in effect on Monday (lasting through today) after the COVID-19 PAUSE.

The reader got to his car ahead of the time to move on First Street between First Avenue and Second Avenue. However, he couldn't go anywhere with cars in front of him and a double-parked Con Ed truck next to his vehicle. The street cleaner passed by. The reader was sitting in his car and shared what happened next:

As the clock hit 9:05, I noticed ... a DoS worker writing on a clipboard on the side of my car. 'Is he writing me a ticket?' I thought. I got out of my car, saw his name on his shirt and asked if he was writing me a ticket. To which he laughed and said 'yeah.' I mentioned I was inside my car, the street cleaner had already passed and there was nowhere to move with his truck and a Con Ed truck double parked — plus that no other cars moved. The street was pretty jammed. He laughed and said 'I have six-and-a-half-years experience and know how this works. You must be one of those liberals.'"

The reader also notes the DoS officer was not wearing a face covering. "The lack of mask is just irresponsible."

The reader received a $65 ticket, and estimates another 20 cars on the block also got one.

Sounds as if the city is getting a head start on its 2021 budget goals. According to the Post, "the city's newly adopted budget includes a planned ticket blitz that’s expected to cost motorists some $42 million in the coming months."
Posted by Grieve at 1:30 PM

DiBlasio gave half the parking spaces to the restaurants to service their bankster debt. Now everyone has to pay more to make up the lost revenue from those spaces, just more subsidizing of the landlord debt.

Too bad he didn't get that officer's badge number and report him for the use of the word "liberal" as some kind of curse. This mindset among every PD in America must be eradicated. We are not the enemy!

Wow, the officer obviously doesn't know how it works as that's just not how it's done here, if a driver is sitting in his/her car! The reader should fight the ticket, and should also report the officer's lack of face covering!

Free parking is a privilege. You want to have a car and not get tickets pay for a garage.

It was totally inappropriate for this officer to make it political. You definitely need to file a complaint. Also, I don't love the idea of a man who clearly doesn't like "liberals" having the power to walk around a famously liberal neighborhood doling out tickets as punishment. He clearly has an agenda.

Not a single car moved this morning on 9th street between first and A. What a joke. They deserve tickets.And a sly person living in his old camper raised the hood of his camper to avoid a ticket---he will probably do that for months to come!The streets have not been cleaned in 3 months and now with the restaurants, there is no way the truck driver will swing in and out to and from the curb between the barricades, judging from seeing past years when parked cars did not move at the designated times. Parking regulations should have went into effect well in advance of the restaurant decision in my opinion. Either do it right, 2x a week or not at all. All this filth cannot be healthy!

If this fool actually wrote you a ticket, he may have made a mistake writing it out and you can fight it on a technicality. If it was print out via a machine like regular traffic agents, there is no chance. I fought a tow and parking ticket back in January on 10th street between 2nd and 3rd ave when they started that water main repair job, that is still going on.

Let us know if there is anything we can do to help. I am happy to email whoever I have to to complain about this unprofessional DOS employee. I don't want him thinking he can stroll around our liberal neighborhood without a mask on picking on us.

I've used these guys before. They're awesome & know the system.

Re: Anon 3:44PM. Go F yourself. If you got a ticket for riding your bike the wrong way on a street why eating vegan food you'd be all up in arms. The idea that all car owners are rich is a fallacy. There are many people on my neighborhood who have lived here for decades who need their car to get to their job.

Gojira, we only wish they didn't think of us as their enemy, because they definitely do think that way.

Expect the GOP to rely on demonizing liberals even more to try and steal the election, because they can't cite any positive gains by their man Trump.

By now, the combover king has botched his job so badly that no one can praise him anymore without looking like a complete fool, so they must resort to other tactics.

People like our friend the parking cop are brainwashed to think in a very shallow way, by all the vicious right-wing propaganda they consume on a daily basis. Alas, our country is now filled with people like this.

How is that relevant to this story?

Get him suspended without pay, that's worth the 65 bucks.

No reason for street parking to be free

Still no reason to have street parking priced at $0

The shitty ticket and enforcer both suck. But I agree with those who say this street parking shouldn't be free. Land has value. The city has a way to monetize it via restaurant seating that will produce tax revenue to pay for other things we want. Without free parking, people with automobiles will either pay for parking, which will also generate revenue, or they will give up their cars and use public transport, which will help support that system. I see that it has been a middle & working class luxury to own a car in the city, but I truly don't see it being viable in current times, and I don't see why everyone else should subsidize it.