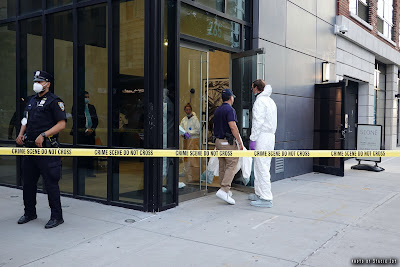 Police have a suspect in custody for the murder and dismemberment of tech CEO Fahim Saleh in his apartment on Houston and Suffolk Monday.

The New York Times has more on the suspect, identified as Saleh's former personal assistant.

Tyrese Devon Haspil, 21, was expected to be charged in a criminal complaint with second degree murder and other crimes.

Detectives believe that the motive for the killing stemmed from Mr. Saleh having discovered that the assistant had stolen tens of thousands of dollars from him, despite the fact that Mr. Saleh had not reported the man and had set up what amounted to a repayment plan for him to return the money, one of the officials said.

Saleh was found decapitated and dismembered on Tuesday. Police offices yesterday said that Saleh was stabbed to death. According to the NYPD and published reported, Saleh used a key fob to select his seventh-floor residence in the elevator Monday afternoon. Surveillance footage shows a man wearing black and carrying a bag following him on and acting like he selected a different floor.

When they arrived on the seventh floor, the man followed Saleh, possibly knocking him out with a taser.

Police believe the killer was interrupted at the scene by Saleh's sister, who had come to the building to check on her brother.

Gothamist has a summary of the arrest and charges here. Haspil was arrested and charged with second-degree murder. He was held without bail after his arraignment early today.
Posted by Grieve at 10:30 AM

I suppose the killer thought of himself as the "victim" having to pay back stolen money so he did the worst possible thing you can do to another human. Allegedly.

GLAD THEY CAUGHT THE KILLER!!!

The idea that Fahim had given this guy a second chance by letting him pay back the money he had stolen in exchange for not going to the police makes this even more tragic. Sadly, some people just don’t deserve a second chance. You really never know who someone is until money is involved.

Why the media was saying this looked like a professional hit is another story. They didn’t need to sensationalize this crime given the gruesome details. My condolences to his friends and family, and good job by the police catching the murderer so quickly.

How did the killer get on the elevator? You just don't walk into those buildings. Was he known as the asst?

What a crazy, sick world we live in.

Have been following this case obsessively as our old apartment on 2nd st looked directly on to 265 E Houston. Am incredibly saddened for this poor young man and his family... he was a good and brilliant guy, proven even further by the fact that he set up a repayment plan for his ex-assistant (and didn't even report him) Horrible story. I feel for the residents of that building and surrounding neighbors to experience this trauma on top of everything that has happened in the past few months. Relieved that his killer has been caught.

How was he charged with second degree murder - when he went there
to kill him ?

Why second degree murder charges for such a gruesome crime? The daring and precision with which the killer entered, killed and cut up the body, can only come from a person who has a violent criminal record or past. Gang?

And I am surprised that Fahim Saleh did not recognize his personal assistant, despite the mask. They had worked together for some time so it's a surprise, especially since I read that they had exchanged some words in the elevator when the killer didn't know his to operate the elevator or have a key fob.

So it was the victims personal assistant who did it after he stole $100,000 from the victim and did not want to pay the money back. What a tragedy the victim trusted the killer and did not call the police and press charges against him when he discovered that he stole his money. It just shows that you cant be too trusting these days.

In iny 2nd is the highest. 1st is for killing cops, eats, judges ect