It's nearly show time as NYC theaters prep for reopening 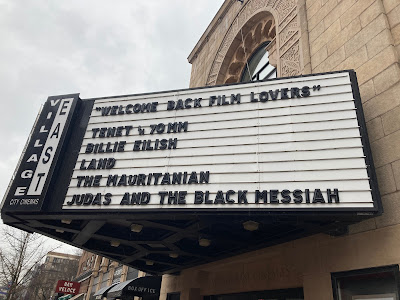 After being dark for nearly a year, movie theaters in NYC are permitted to reopen tomorrow at 25-percent capacity.
However, don't expect to see all of the local movie houses up and running right away.
Here's what to expect, starting with the Village East Cinema on Second Avenue at 12th Street (marquee photo above by Doug) ... which will have a new name...

We’re reopening Friday March 5, and we are excited to welcome @CityCinemasNYC to the Angelika Film Center family, as Village East by Angelika and Cinema 123 by Angelika!
For more information, visit us at https://t.co/K3mu1MJiw8.
See you at the movies! pic.twitter.com/T1W311Xu6p

Before the pandemic, the Village East Cinema showed movies that originally opened at the Angelika Film Center. Plus, the Village East Cinema is owned by City Cinemas, a branch of Reading International. The Angelika is also under the Reading International umbrella. So they're keeping it all in the Reading family.
Find the cinema's website here.
Elsewhere in the downtown film community... (and masks are required to be theaters)...
• Angelika Film Center., Houston Street. Opening on March 5. Website here.
• Anthology Film Archives, Second Avenue at Second Street. No reopening date. Will continue with virtual cinema.
• Cinema Village, 12th Street. The small theater is hoping to reopen around April 1, per the Post.
• Film Forum, East Houston. Opening on April 2.
• IFC Center. Opening on March 5. And per IndieWire: "Mandatory mask-wearing at all times, no concession sales, and no eating and drinking allowed in theaters."
• Loews Village 7, Third Avenue at 11th Street. Opening March 5. Website here.
• Metrograph, Ludlow Street. No reopening date yet. Will continue with virtual programming.
• Regal Cinemas, Union Square and Essex Crossing. No return date just yet.
• Quad Cinema, 13th Street. Opening on March 5. (Updated)
Posted by Grieve at 5:21 AM

bring them all back, if f***ing love a movie theater

the COVID situation is definitely getting better, but think it'll still be awhile before I go back to a theater. I wish them, and all businesses, the best of luck.

Good luck to them on their reopening. It will still be a long time before I'm going to sit in any movie theater.

I've definitely become spoiled by watching movies at home on demand, where I don't pay $8 for popcorn, and I can take a bathroom break when I need one. (And where I don't have to sit through 20 minutes of ads ahead of the film!)

Wonder how much movie theater tickets are going to cost now?

Regal Cinemas better re-open, I want to see Godzilla v Kong on the big screen! (My money is on the lizard, of course.)

If they can find a way to inject some vaccine into the popcorn then I’ll be the first one on line. Seriously, don’t we need to be vaccinated first before gathering in large groups? It would be nice to have separate screenings early in the day for older people and those who have been vaccinated, and later in the day Russian Roulette screenings for everyone else. Will the movie theaters be checking people’s temperatures now, or just searching our bags to make sure we aren’t being in in our own food and drinks as usual?

I'm trying to figure out the ethics of going to the movies once vaccinated (I'll be through the sequence soon). I'm reluctant to resume indoor dining because of unvaccinated staff in such close quarters, at least until everyone's had a chance to get the shots. Is it the same for theater staff, who aren't coming in to talk to you every fifteen minutes in a small space?

When was the last time you went through a bag search? I'm bringing sandwiches, candy, and soda into movie theaters for years with zero problems.

I miss seeing movies but do they really expect people who are strangers to each other to sit together breathing in the same air in a confined space for two hours? It will be quite a while before I will do that.

@3:24pm: Seriously, you eat SANDWICHES at the movies?

This is a pro move especially when watching a film on 2nd Ave. Mozz & proscuitto with roasted peppers from Russo's + some rainbow cookies next door from Veniero's...as good as it gets

Regal was doing bag searches all the time. I saw a ton of food being trashed while waiting on line for my ticket to be ripped. The trick was to hide your food at the bottom of your bag, or in your pockets. But I never brought sandwiches in.

Yes, Regal does bag searches, but just be white and not too poor looking and they'll be pretty cursory. I think to the extent the employees care they're more worried about you bringing in a gun than a sandwich.

in 2018 I went to the Regal cinema on Union Square and was asked to inspect my bag by the ticket taker, I refused and the ticket taker shrugged and I walked away into the theater

WOW. If mainstream theaters really want to recover, they should start showing movies that are worthy of admission. The CRAP that passes for film entertainment today, for which audiences are grossly over-charged, is not worth watching and wasting our money on.

Here's a crazy idea: take a theater with multiple screens and show a different genre of film in each one: a western, a mystery, a comedy, a love story, a drama, etc, and charge a REASONABLE admission price, like $5 - $10 at most, and then watch the money pour in.

I suspect that today's horrible films are less due to a lack of originality, a lack of movie-making skill and a lack of talent, than they are due to a plan to dumb us all further down. If so, their plan is working quite well.

If commercial rents were not so INSANE, we would never have lost the dozens of wonderful retro theaters where new generations could enjoy GREAT films. Only Film Forum is left. I hope they pull through!