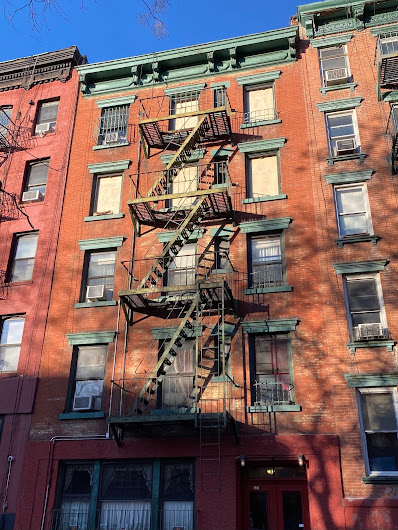 Wendy Schonfeld died in a fire in her fourth-floor apartment at 335 E. Fifth St. between First Avenue and Second Avenue late Thursday night. She was 80.
The Daily News has more about Schonfeld and her life:

Even at 80, Schonfeld was a vibrant fixture in her East 5th St. building and a priceless mentor to former colleagues at the Metropolitan Museum of Art.

"She lived and breathed the arts," said Robert La Force, a neighbor for 29 years. "Even though she didn’t really go out the last couple of years, she was still a part of everything," said La Force. "She would stick her head out the window and talk to people."

Her home was crammed with artifacts from Mexico and elsewhere collected during a lifetime of devotion to the arts.

At the Met, Schonfeld was recalled for guiding younger colleagues to get their noses out of books and helping them communicate the grandeur of art to the general public.

"She had that wonderful New York way of setting things straight, with kindness," said Joanne Pillsbury, a curator at the Met. "She was a fountain of information about objects and ideas."

According to the News (and as several readers pointed out), there was another fire in Schonfeld's apartment more than 10 years ago. She reportedly suffered permanent health problems from smoke inhalation.
As for this fire, FDNY officials told the News that "the blaze may have been caused by faulty wiring in an air conditioner."
Photo by Steven
Posted by Grieve at 12:15 PM

Sad to read. She sounded to be quite a (good!) character...May she be at peace.

Tragic. Condolences to her family and friends.

Breaks my heart. Sounds like a neighbor I would have loved to meet. Thanks for the research and the legacy. Hoping some of her collection survived

An East Village life in the arts. Condolences to her family and all that knew her.

I have such fond memories of the last time we were together in New York's Chinatown and since I first met her almost 30 years ago, through a mutual friend in Chicago, she has always been an inspiration to me, widening my appreciation of the things that really matter. God bless her.