Addressing the problem corner of 14th Street and 1st Avenue 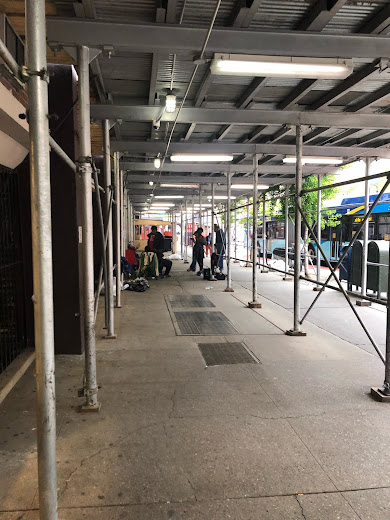 The long-problematic corridor along 14th Street and First Avenue is getting some attention.
First, a reader report just from yesterday:

As you are also aware the intersection of 14th Street and First Avenue has long been plagued by homeless individuals, unsanitary conditions, drug use, alcohol use and, at times, violence. Over the past year these issues have moved over to directly in front of my building to where there is now an encampment.

Several residents from my building have been in contact with Carlina Rivera's office, 311 and the police (the 13th Precinct, as this is on the north side on 14th Street) but unfortunately the situation has not only NOT been resolved but has also exacerbated.

Residents and staff from my building who have attempted to address those camped out front have been threatened, so understandably people are hesitant to confront.

The encampment (pictured above, via a reader) is in front of the retail post office at 335 E. 14th St. between First Avenue and Second Avenue.
However, the calls and concerns from the residents have apparently been heard: Today (May 1), we're told that representatives from the 9th Precinct, several city agencies and City Councilmember Carlina Rivera's office will be on the southeast corner from 4-6 p.m. for a community outreach event.
Posted by Grieve at 10:15 AM

This whole stretch of 14th str across to avenue A is a shitshow!! Especially on the weekends!! The sout side of 14th should just be called “The thieves bazaar” on Saturday’s!!!

Great that this is getting attention. Would have been nice to have the 13th Precinct there as well since that is where the Post Office is actually located. There seems to be a lack of coordination and accountability by all parts of the City government. 14th Street has been in trouble for over a year now.

Honestly your headline is misleading since none of the anonymous dime droppers and comment posters here really care about anything but using the police to move the problem elsewhere. This same story, at many other locations , has been reported by EV since he started this blog and unless real steps towards drug and alcohol treatment and building more housing for the poor who congregate at this location are created using cops to move people is not addressing the problem. John Penley

I live in that building where probably close to 20 neighbors have reached out to Councilmember Rivera's office about the drugs, the urination and filth under the scaffolding. This past week, one of them was blocking our front door and not allowing residents to enter. Regardless of how many times we have specified the NW corner, her staffer replies that they are aware of the problems on the SE corner - wrong corner, wrong precinct. Just absolutely clueless and inept. A quick LinkedIn search revealed the person Carlina assigned to address this unsafe situation where we live is an intern who is literally a college student. June 22nd can't come fast enough and I will happily pull the lever for Erin Hussein.

It's always the fault of hard-working people never the miscreants themselves. Do I read that right Penley?

I've personally opened many 311 cases for "Homeless Assistance" for these people. That's what Councilmember Rivera's office asked us to do. They are all closed saying the individuals refused assistance. I've opened cases and requested for other encampments as well - like in front of Crocodile Lounge and the one on the corner of E15th and 1st that was there for months.

I don't think asking our elected officials to address a problem is equivalent to just wanting the problem moved. Tolerating unsanitary, threatening, unsafe situations is unacceptable. But until this City gets serious addressing these issues, it will be the residents and businesses that suffer. New solutions are needed that may include a new Mayor, new City Council, new NYPD/Dept of Homeless Services/Dept of Sanitation/Dept of Health policies.

There does need to be more housing for the homeless, more spent on mental health and addiction. At the same time, those of us that live here don’t need to be harassed by packs of wasted, incoherent people living under any scaffolding that goes up. I’ve also tried to get people help when I run into them, but the cops have zero will to get involved, maybe what they can do is limited as well. Maybe if we can stop lowering the taxes on the rich and corporations we can help pay for something to happen.

Councilmember Rivera's office was useless. I was physically accosted twice by aggressive mentally unbalanced individuals and the City has ignored my pleas for help. Disgusting

From Regan on neoliberalism has slashed spending on helping the poor, especially mental health. In return we’ve had an explosion in homelessness. If you care about other people, you support politicians who increase funding. If you only care about yourself, you don’t.

"slashed spending".......Yes, of course. The $850 million Emperor DeBlasio's wife spent couldn't have possibly made a dent on public mental health issues. So terribly selfish of people not to set up a supplemental GoFund Me page for the NYCs bums, drunks, and lowlifes.

John Penley: Regarding this specific location, in front of the Post Office/the building I live in, I’m assuming your comment is based on absolutely no knowledge of any facts about this matter. This past Thursday I spoke with a representative from the city and specifically requested that the Department of Homeless Services visit the location as, I’m well aware, this is an involved issue and that the police can only do so much...and for that matter, DHS can only do so much too, as that agency can only offer services and those services can be rejected. There are numerous city agencies/programs/etc. that have long been in place aimed at making progress in addressing homelessness, drug abuse, mental illness, and many other challenges; this is all quite multifaceted and nuanced, so you simply making a blanket statement adds very little to the conversation.

It's OK XTC, you didn't do anything wrong by saying you hate the poor. Just own it.

I've been threatened several times and don't walk across 14th st for this reason. I posted on social media and got attacked for being so judgmental. It's pitiful. Wth do we need to call? Enough is enough.

Yes it is long overdue. Living in the exact area for just over a month after relocating from Ave C.
First Avenue is fraught with many aggressive wandering ill stricken hustlers. 14 street is a powder keg up of stick slinging yahoos.
Gotta watch your back and be quick on your feet.