Giving Tuesday: the return of twice-a-week alternate side parking 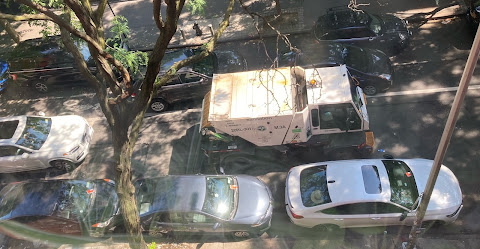 Starting today (Tuesday!), the city's full alternate-side parking rules return after a two-year pandemic hiatus.
As Gothamist reported, for these past two years, drivers only needed to move their cars once for street cleaning, "rather than the two designated days typically required in many neighborhoods."
Also per Gothamist:

The reversal comes as Mayor Eric Adams attempts to address frequent complaints about trash and dirty streets, and an increase in the rat population. Kickstarting the program also fully restores a reliable revenue generator for the city. Most available statistics from the city comptroller’s office show the city generated $515 million in annual revenue from parking fines in Fiscal Year 2016, a steady increase compared to prior years. A parking ticket for ignoring ASP rules can cost $65.

Email ThisBlogThis!Share to TwitterShare to FacebookShare to Pinterest
Labels: parking

Agree with anon 3:58PM. The rats are by the dining sheds, not by the cars.

The city NEEDS cars. Without them, MTA would go bankrupt and the roads wouldn't get repaired. I guess the city didn't have the foresight to implement their own version of CitiBike - or negotiate a better contract - where the city reaps the benefits of all the yearly users.

Did you all bother to put your input in to the nyc website, before the decision had been made? Or do expect Grieve to move those sheds on his own?

Bring back alternate side parking from 9am - 5pm. There are way too many weekend warrior cars parking on the street during the day

The increase in trash and rats is due to the dining sheds. They should be removed. Cars have nothing to do with it. Will the city ever take responsibility for the shoddy services it provides? 101 billion isnt enough? It's not about politics it's about incompetence

The dining sheds bring vibrancy and people enjoy eating at them. It’s nice to have a meal outside. There’s always been rats here. It’s not like rats are going away even if the sheds are removed. Free car storage for private cars contributes nothing. Just pollution and crashes and blight. The city should replace free car storage with bins for the garbage so it’s not piled on the sidewalk where the rats eat it and breed.

Hochul just extended outdoor dining for 3 years. Hopefully that's just a blanket decision and the city still has jurisdiction over creating its own rules.

I don’t drive but have some friends who do - they work in other boroughs or out of the city and no reliable public transportation.
Similarly, people like building workers or night shift workers who must commute in from Yonkers or NJ etc.

My preference for “healing the city” (per Choresh Wald 11:29) would be that the super-rich went elsewhere.

Pritzker, Croman, and other 1% could leave NYC to us regular folks.

Car owners (and yes I'm one of them) only have themselves to blame for this.

Every time I dutifully sat in my car on ASP days and moved my car so that the sweeper could pass and clean the gutter, I was in the small majority.

On many occasions I saw drivers sitting in their cars, but with no intent of moving, leaving the sweeper to give up and just skip the street and move on.

If the street gutters genuinely got thoroughly cleaned on that day I'm confident that one-day a week ASP would be plenty for our neighborhood.

LOL Anon 5:05 if there were bins we would just be living amongst a garbage dump full of dripping sludge and more graffiti, no thanks. And to call public parking "storage" is so obnoxious. I ride my bike quite a bit but can't do any of the distances/weather/tasks/etc. on my bike that a car does. Get real and stop being so extreme, please.

Ticket enforcement for the rampant illegal parking needs to be vastly increased. A great way to do that would be to give citizen reporters a cut of the ticket revenue, just like for truck idling. https://www1.nyc.gov/site/dep/environment/idling-citizens-air-complaint-program.page

The top 1% pay 43% of NYC’s personnel income tax. If you think NYC is currently a sh-t show just imagine police, fire, and sanitation services reduced by a commensurate level.

We should also have residential parking stickers, especially in the East Village. Residents that live in the neighborhood should get priority over the out-of-towners that come to our hood to get drunk and obnoxious. If they can afford the $15 cocktails and the DWI tickets then they can afford to park in garages.

I don't understand why the street sweepers aren't accompanied by tow trucks. After a few times retrieving your clunker from the impound lot in deep Brooklyn, learning will presumably occur.

re: 6:06 PM
you don't understand it? It's because since Bloomberg the city cares about tourists and not residents. It's that simple. If you live here you are a second class citizen. The city, 311 etc is run for the businesses - mainly restaurants and bars and nightlife.

Dining sheds were okay in 2020 and 2021. Now, not so much. Your idea about replacing car parking with giant dumpster bins is the dumbest thing I’ve heard all day. Congrats.