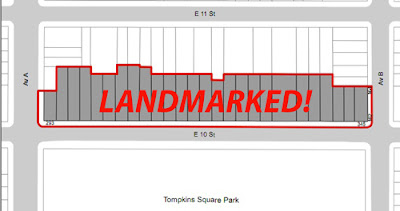 Curbed has news from this afternoon's public hearing at the Landmarks Preservation Commission (LPC) regarding the East 10th Street Historic District.

The East 10th Street Historic District comprises 26 buildings on the north side of East 10th Street between Avenues A and B that reflect the 19th and 20th century history of the East Village.

Well, then. Curbed added this to their earlier post:

"While the LPC moved quickly to prevent Shaoul from altering the building, the good mood among preservationists after the LPC's affirmative vote dimmed when it was learned that the DOB issued the developer his construction permits this morning, just hours before the LPC hearing and vote."

Here's the paperwork from the DOB... 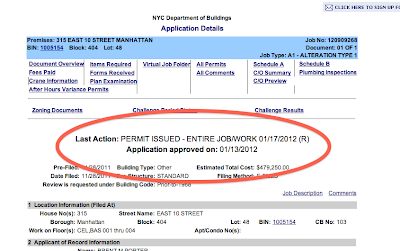 The city gave Shaoul the OK to convert the building from nonprofit use to residential — plus an addition floor to the circa 1847 building ... appropriately enough, on Friday the 13th.

The Lo-Down has more on this story, including a statement from Elizabeth de Bourbon, the LPC’s director of communications.

[T]he lawyer for the owner contacted us to say his client plans to meet with us to discuss suggestions for the design of the one-story addition and is willing to work with LPC staff as they move ahead on their grandfathered permit.

Yeah! In your face Shaoul!

Alleluia! For a change, in time to stop the carnage.

DOB is the single most corrupt agency in the entire city.

From earlier thread:
EV Grieve said...
We'll update as soon as we hear anything. The folks at the GVSHP should be all over this.

Yeah well, GV is not EV. My take is nobody around here really gives a fuck anymore. It's all a lost cause. ...unless somebody's got lawyer power up the yin-yang; and probably the only one around here who does is Shaoul.

Furthermore; any and every developer will now feel free to request a variance for their building project and site this episode as precedence, blah, blah, blah...

wow, what a scumbag.

Haahahaaha! L-P-C is my b-i-t-c-h! I am gonna put a huge LED billboard on the front of my building on E. 10th showing Susan Stetzer pole dancing with EVCC members waving $1 bills!

they've certainly not wasted any time getting started. their crew was up there at 8:30 this morning demolishing the chimney's. a very nice wakeup call.

what the f*ck. i demand an investigation into this latant corruption!!! it's a giant slap in the face from the crooked b@stards at bloombergs DOB. people do not tolerate this massive abuse of power.....
NOT OKAY
maybe shaoul will swing the crane over to the nursing home, im sure he wont be bothered that there are elderly sick people still inside.
b@stard

The Times has the story today too...

Already taking the chimneys down is just criminal!

To residents of E 10th Street: Ben Shaoul's construction crew are notorious for working BEFORE 7am and AFTER 6pm, Saturdays, and generally trying to get away with whatever they can. Be vigilant! There are rules regarding noise and dust and debris. Call in to 311 and register complaints. This will not stop what he's doing, but IT WILL BE ON RECORD!
(Of course, there are no pesky rent stabilized tenants to get in the way of profits, so the crew may be on better behavior!)

Agreed, the city should have the right to audit the personal financial records of any persons responsible for approving this permit... Bet they'd find something dirty.