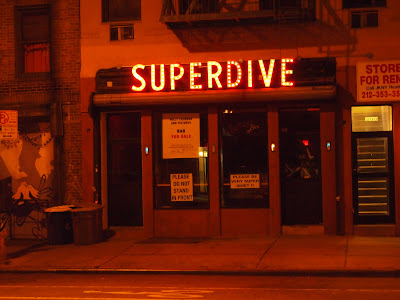 As we pointed out yesterday, 200 Avenue A was on the State Liquor Authority's full board meeting agenda. Well, we should have caught this one...

A group calling themselves Hospitality LLC with a concept for an "art gallery with a full-service restaurant" concept has appeared before and been rejected by the CB3/SLA committee three times. The group then decided to go directly to the State Liquor Authority for its license.

However, as you can see, the SLA hearing had 200 Avenue A on the agenda under Rapture Bookstore LLC — the trade name for Superdive.

According to someone in attendance, the Hospitality LLC reps were not at the hearing. It was Allan of Superdive and his lawyer present to argue the legality of their denied license renewal last year.

As we understand it, district manager Susan Stetzer was prepared for Team Superdive's appearance. SLA Chair Dennis Rosen tabled their hearing so he could meet with all the interested parties later this month. There's some question about the legality of denying a renewal for Superdive.

At this point, it's unclear whether Superdive wants to reopen as, well, Superdive, or whether the management wants to be part of whatever new venture opens here.

We sent an email to Allan at Superdive seeking comment.

Previously.
Posted by Grieve at 9:08 AM

Anony 1/5/11 8.02 AM from the EV Grieve tread “Why the EV should fear NYU 2031.” should be is very happy regarding this Superdive news and the news that a Subway chain store will open at the former Intervideo Electronics. After all, we who complain are just “babies”. By the way, my word verification for this post was "anshists". How appropriate, I am so proud.

Hmm... If the CBs/SLA can't legally deny renewals of liquor licenses, it doesn't seem like there's really any sense in issuing them at all, does there? Bars are a huge strain on our neighborhood, even when run by good operators; eliminating bad operators like SuperDive is especially good for our community. Hopefully the SLA will see this and not give into their whining.

SLA can and has legally denied renewals but doesn't seem to the legal grounds in this case.