[Updated] This feature should get a 'Rise' out of you 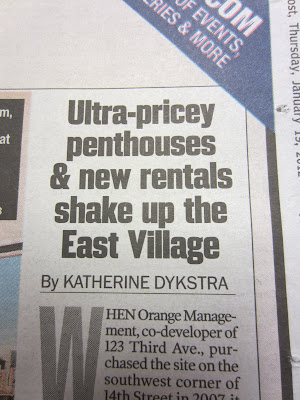 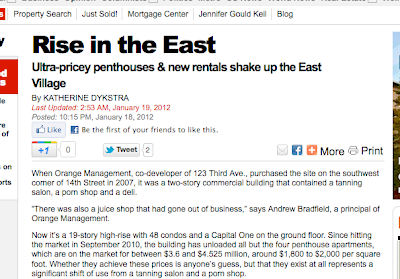 ... and they have details on some of these stalled developments, empty parcels and mystery lots that we've been watching though the years ...

Should we start with the bad news or the worse news?

Basically, there's a lot of building here on the horizon. Like!

• The Mystery Lot on 13th Street between Second Avenue and Third Avenue.
This space will become an 82-unit, eight-story development, which should break ground this summer for a late 2013 opening. "Prices are still to be determined for the project’s studio and one-, two- and three-bedroom units," according to the Post. 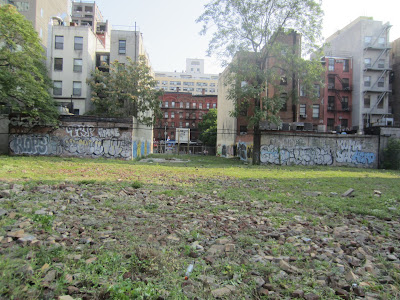 The article also mentions the developments coming to 74-84 Third Ave. (part of which once belonged to Nevada Smith's) and 316-318 E. Third St., which is awaiting demolition to become an eight story, 33-unit apartment building. Developer David Amirian told the Post that he will offer only studios and one bedroom units.

"The market right now is to build rental. You want to build affordable housing for young people," he said.

Here are photos of the two from the Post. 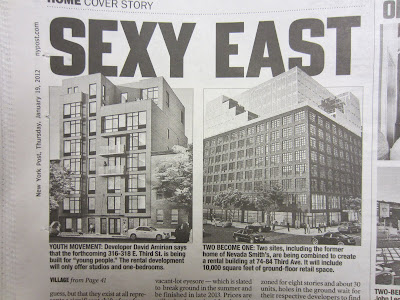 Hmm, 74-84 Third Ave. looks particularly... ENORMOUS. (I will miss the sun while walking by here.)

A few other passages:

• "[The East Village is] young and up-and-coming, and there are a lot of young professionals who live there and a lot of students and a lot of grad students," Amirian says. "We are definitely looking for other parcels in the neighborhood."

Up-and-coming? Don't you think those days have up and came? Or something.

• Of course, some of the East Village’s rental buildings could eventually go condo. The idea of $2,000-per-square-foot penthouses has to have developers considering the possibility.

More on some of the other news items here later when I regain consciousness.

As the Observer put it in their coverage of the Post feature:

In short, the former bastions of East Village grit are giving way to rental buildings where parents will pay for their NYU student to live comfortably and drink heavily.

Ugh, this is no way to start the day. Will pass on post piece until later on.

wait, the EV is up and coming?

What makes me angry is all the single childless yuppies have raised the income levels in 10009 enough that after school programs have been cut because it is no longer "at risk". The problem with that is there are still a lot of children living in public housing. One of the cut programs is actually in Lillian Ward Houses - so poor school kids lose out because of expensive development, most of which isn't even meant for families with privileged kids who don't need free after school programs. And meanwhile Bloomberg talks about how important education is to the future of the city.

I'll miss the East Village when I leave NYC, but I will not miss the greed of developers.

This article makes it abundantly clear that the East Village of the future will no longer be for families. (Not that it is now.) It will continue to be a transient home for NYU grad students that will take away any feeling of community that is left.

Man, this is depressing. Really, they're calling these apartments "affordable housing" for young people? Since when are luxury buildings with luxury rents "affordable"?

disgusting that the best neighborhood in the city is slated to become the worst.
no more art, no more culture, no more activism, no more originality or excitement?
just dumb comsumerist yuppies and their bratty, self-entitled, moneyed spawn?
these are the NYU grads of the future, and their worthless, transplanted kinfolk from nowhere, USA - there goes the neighborhood...
a shame, really

Ok- so what everyone is saying is that there's no upside to greed?

And I thought my building on E. 7th with a doorman was a bit out of the ordinary for the neighborhood. These will change the feel for sure.

I'm a post-college age person who has lived in a pre-war walkup in the east village for several years.
I don't like these 'glass' developments. I don't like how kids my age act around the neighborhood a lot of the time.
If NYUers and Yuppie juniors want to get drunk, act like frat people, and live in a culture-less luxury building, thats fine- just NOT in the East Village.

I like certain parts of this neighborhood because it has a sense of community. I try to respect the families and long-time residents here because I want to feel like I'm a part of it.

At the heart of all the problems luxury condos bring is a certain attitude when approaching any community-minded decision- They aren't a part of it because they think they're 'above' it.

This should leave no doubt for folks in the east village who wonder why they should care about NYU's 2031 growth plan. Building more classrooms on laguardia place will only mean that the increased student population will need places to live... that will be in the EV. Soon enough the Village from river to river will be NYU-land. sad.

i've been here two years as a post-college grad. i'm planning to move down to nolita to get away from the NYU kids/suburbia. However, avenue A and tompkins sqaure park are still nice, who knows how long until they arejavascript:void(0) bastardized