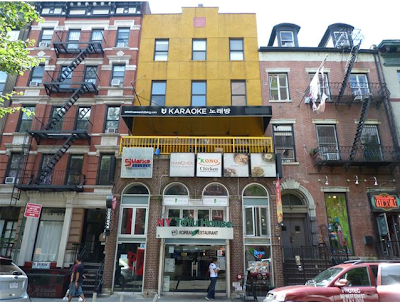 6 St. Mark's Place, currently home to NY Tofu House and a very large karaoke bar, is now on the market. The building between Second Avenue and Third Avenue is currently asking $14.5 million.

Per the Massey Knakal listing that arrived yesterday:

[T]his elevatored commercial 5 story plus lower level building is 81% NNN on one of the busiest downtown retail corridors. The average rents are $52/SF and all have long term leases in-place. The seller is willing to escrow 1 years rent for the second floor for $15,000/month until a suitable tenant is found. This is an excellent opportunity for an investor who is looking for strong in-place cash flow in one of the busiest corridors of the East Village.

It likely is an excellent investment... 51 Astor Place is rising about a 1/2 block or so away... and once that thing is up and functioning, the retail landscape along here could change dramatically ... marking a switch to restaurants/businesses catering to an office crowd...

Previously, before the quick succession of failed businesses, No. 6 was home to Mondo Kim's ... and going back ... No. 6 was first, starting in 1913, home to the Saint Marks Russian and Turkish Baths ... which, in 1979, became the New Saint Marks Baths, the gay bathhouse (purportedly the largest one in the world) that the city eventually closed in 1985 during the AIDS epidemic.

Also, in 1914, The Modern School — "an anarchist school with Emma Goldman on the board," according to NY Songlines — had space in the building.

Anarchism alive and well on st. marks in 1914, Nice.
Those were the days huh

I wonder if Mr Kim has a stake in that building .. almost every business after him is Korean/Asian.

And now this: "marking a switch to restaurants/businesses catering to an office crowd... "

To misquote someone or other, "Saint Mark's is the only place in the world to go from barbarism to decadence without passing through a phase of civilization."

I'm the next door neighbor to this building... just have to say the karaoke bar patrons are generally obnoxious and the noise of awful singing can be heard through the walls at deafening volumes well past 4 a.m. on weekends. And since Tofu House has started to give out free samples garbage is regularly thrown on our steps. They are both egregiously disrespectful of their neighbors.