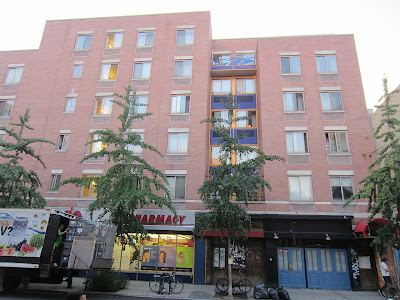 "Expansion" is the word coming out of the Duane Reade on Avenue B at East Second Street, per a tipster... Employees say that the drug store will expand next door into the spaces previously occupied by Zaitzeff ... and the long-dead High Chai Tea Room.

In addition, Duane Reade will add a second level, digging into the basement space where the Dolphin Gym was before closing back in February 2010.

Seems fitting to have a gargantuan Duane Reade here. This is the reality of the neighborhood ... Previously, this space was home to a gas station... shooting gallery ... and then, for a 10-year run, The Gas Station, aka Art Gallery Space 2B. Alex at Flaming Pablum wrote about the space here.

For 10 years, the Gas Station, with its towering sculpture built from discards ranging from a 1970 Plymouth Valiant to department store mannequins to television sets, has been a symbol of the Lower East Side's Bohemian ways and artistic resolve. 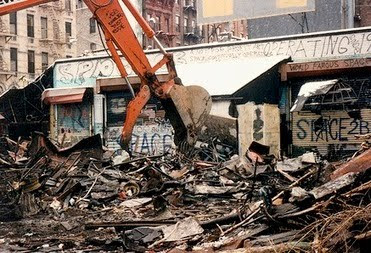 [Via Flaming Pablum]
Posted by Grieve at 6:45 AM

Thanks for this--I always wondered what happened to the Gas Station. My band played there c. 1991/2, and then one day it was just gone.

Jack is Back said...

Ooh NO. Can we have anything more bland? Maybe a Citibank?

This totally brought back memories of my college years... that block (2nd St. from Ave B corner to Ave C) would scare the crap out of me. I would dread walking home at night from studying at NYU as I lived just a block south of Houston directly across. I recall having to asking myself each night whether it was safe (which were usually the cold nights) or have to walk the extra steps to avoid those unpredictable heroin users hanging out. They would be there early in the morning as well. So I really can't say DR is not good for Alphabet City right there.

well, there's already a DR here (for years) so we might as well get a good one. fine.

It's a real sign of the times for the neighborhood when the lesser of all evils is a Duane Reade expanding across 3 vacant storefronts as opposed to another bank, 7-11, Ihop, NYU dorm, or an asshole foodie/fratty bar restaurant.

I've lived a block away from this since 1991, and every once in awhile I wonder how and when the Gas Station disappeared. Over the past few years, I started to think it was just a weird dream I had, and that it never really existed.

But I do remember that this is where GG Allin played has last show...in 1995? After trying to rape several audience members, later that night he fatally ODed at someone's apartment either on my street or 2nd street.

I think I only went inside there once or twice for an "art" event or party (I preferred the hardcore matinees at ABC No Rio) but I would walk by it every day and stare at all the junky-looking sculptures created by junkies. Memories.

That "someone's apartment" where GG Allin OD'd was Johnny Puke's girlfriend's. GG was there at Johnny's invitation, to his gf's dismay. When it turned out that GG had taken the invitation to crash way too literally, Johnny's gf kicked Johnny out. Some people really don't like a corpse on their couch, I guess.

I miss those lots that had the sculptures of trash- I think there were 2 different ones? As another poster said- One day I realized they were gone as if they were never really there at all. Just a dream of a vibrant crazy place with pinwhhels and dolls heads on the fence while a million bizarre objects clamored together in a tower of the bizarre.

I found a few old pics I took from my window - pasted them together in Photoshop: https://www.flickr.com/photos/leolondon/36960720082/

thanks for sharing the link, Jonathan!