Burger House, the so-called "Zen Grill," opened on Broadway near East 12th Street in June 2011... it was another in the rather suddenly trendy Asian-style burger places popping up (see Bento Burger) ... there were better places for burgers, though the fare here was always solid enough... anyway, the place closed on July 10 and the space is for lease... 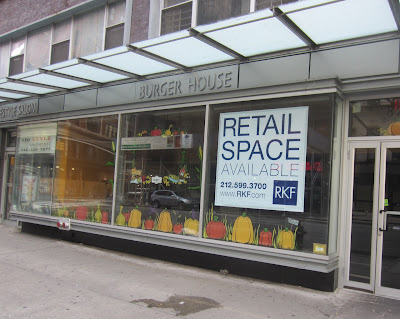 Prior to this ... and for decades, Bon Vivant served always-reliable, reasonably priced diner food... Eater reported that the same owners were behind the new concept... 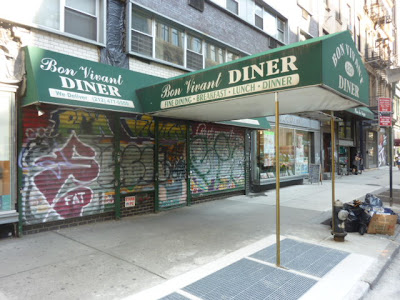 As New York magazine noted: "Imagine a prototypical old-school diner and, chances are, you’ll get a close approximation of Bon Vivant. Owned for decades by a Greek family, it has a huge illustrated menu, vinyl maroon booths, and chrome chairs."

That description sounds like the makings of an obituary in the new New York City. (See Jeremiah's Vanishing New York for the graveyard full of diners that have closed ... Tiffany Diner, Chelsea Gallery Diner, the Galaxy Diner, etc.)

The landlord upgraded all the storefronts along here... given them a sleek, impersonal feel ... So even if the owners were to reopen Bon Vivant, it would, of course, never be the same... Or could it work again, some equilibrium maintained...?

Previously on EV Grieve:
A bad sign at Bon Vivant
Posted by Grieve at 6:20 AM

Loved Bon Vivant. It was perfect for grabbing a bite and coffee before/after the movies.

that generic, bland storefront is ridiculous

Here's why both concepts ,and any new concept without liquor won't work; The asking rent is 24,000 a month. Ridiculous.