2 additional floors coming to 205 Avenue A; another Lowenberg-Issac production 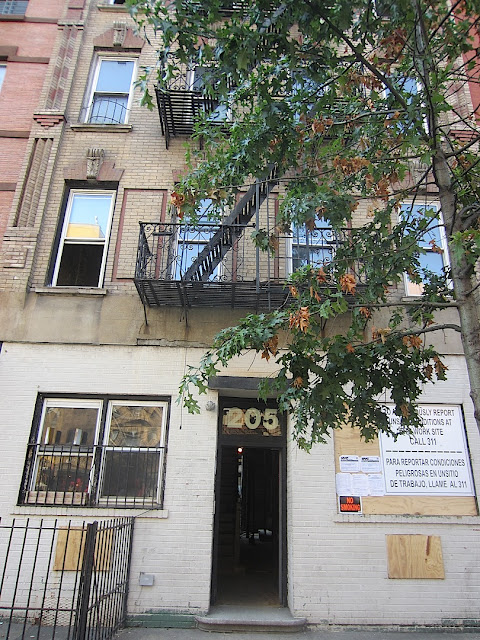 205 Avenue A between East 12th Street and East 13th Street is resident-free as workers have gutted the building this past week... According to the DOB, two additional floors are on the way via developer Terrence Lowenberg and architect Ramy Issac.

Perhaps we can expect to see more dorm-like conditions upon 205's unveiling, much like the previous Lowenberg-Issac production at 326-328 E. Fourth St., where there is a six-bedroom unit available for $8,000. (The two also teamed up for the in-progress additions at 154 Second Ave.)

Meanwhile, there are two complaints dated Wednesday on file with the DOB... from next door at No. 203:

CONSTRUCTION AT THE ADDRESS LSITED IS NOT TAKING PROPER SAFETY PRECAUTIONS AND AS A RESULT NAILS, SCREWS AND OTHER DEBRIS IS FALLING ONTO ADJACENT PROPERTY

Previously on EV Grieve:
City has OK'd one-floor addition for Ben Shaoul-owned building on Avenue A and East 12th Street
Posted by Grieve at 6:40 AM

Email ThisBlogThis!Share to TwitterShare to FacebookShare to Pinterest
Labels: 205 Avenue A, gut renovations

What happened to the reidents who lived there?

Was curious about that myself... I asked around, but no one knew...