[Updated] Has the Lyric Diner closed on Third Avenue? 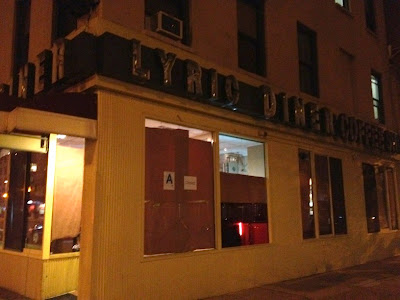 EVG reader @Sheba passed along word earlier today that the Lyric Diner on Third Avenue at 22nd Street appears closed... Several other people have tweeted this... there is brown paper over the windows and a large CLOSED sign. We called, though no one answered the phone... it's possible that this is just a late-summer clean up/renovation, though you'd think they'd leave a note ...

I haven't been here in a few years... I heard that the quality had slipped... I recall that they served egg creams and had something on the menu called the Twin Tower ice cream soda...

Updated: Per KB in the comments... the Lyric is only closed for renovations...
Posted by Grieve at 3:22 PM

It's only closed for renovation! Asked the owners yesterday.

Glad to hear it's not closing!

Oddly the food is still in the display cases. What's with diner suddenly closing for renovations like Orion did a year agom

Thanks! So glad it is not closed!

Wish places like this would at least add a "for renovations" to their closed signs...

I was surprised to see this too. I had lunch there last Saturday, then walked past on Monday and saw it was closed. Yes, a little notice would have been nice. I hope it's only temporary, and that it doesn't stay closed nearly as long as the Orion did. They were out of business for months.

Was told by one of the Greek diner waiters in the neighborhood that Lyric Diner has had to close for now due to tax problems, and no one knows if they will reopen anytime soon, guess it depends on if they can come up with the money. As of late September there are still no work permits in the windows and no renovations to be seen, so the story sounds like it could be accurate.

How long has the Lyric been there? I'm wondering if this is the place I used to stop for late night french toast when I lived in the area in the early 90s. Thank you.

I actually wanted to eat at Lyric today. It is closed and there is a sign in the window that indicated that a Greek diner would open in it's place.

The sign says "Greek Taverna." Not sure if it will be a diner. I miss Lyric.

Appears to have reopened recently as Taverna. De-emphasized Lyric Diner sign still in place on the 22nd street side but no other apparent connection to the old place. I walked by on Sunday morning and it was dark inside. Definitely not a diner anymore!