An update on sand, bread and rats in Tompkins Square Park

Several readers have asked us what was happening with the sandbox in the playground on Avenue A and East Ninth Street in Tompkins Square Park... the sandbox has been closed in recent weeks... 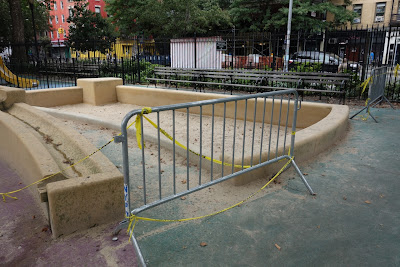 We didn't hear back from anyone at the Parks Department... we also asked Chad Marlow, who helped launch the Tompkins Square Park & Playgrounds Parents' Association (TSP3A) in 2011 to address such issues... 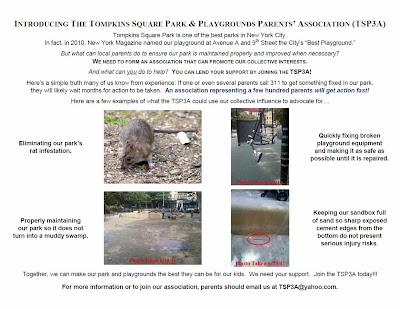 Marlow confirmed that the Parks Department had closed the sandbox because of a recurring problem — the sharp lip is exposed when the sand level gets too low ... kids are apparently removing the sand for various reasons... 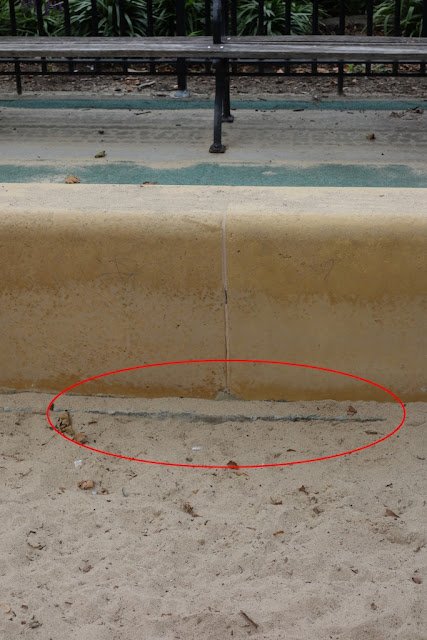 Marlow said that the parents lobbied to have a sign placed next to the sandbox ... 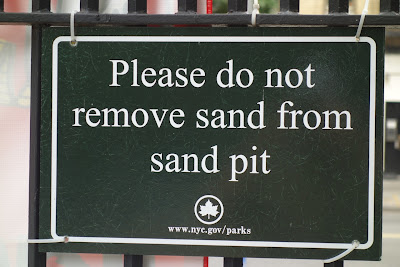 "The jagged edge in the sandbox and its proximity to the sprinklers are serious design flaws, but they are manageable if parents and caregivers enforce the rules for their own kids and others," said Marlow, who noted that the sand is on order.

In other Park matters, we asked Marlow for an update on the ratstravaganza... that made headlines this time last summer... TSP3A first raised concerns of the growing rat population last summer. 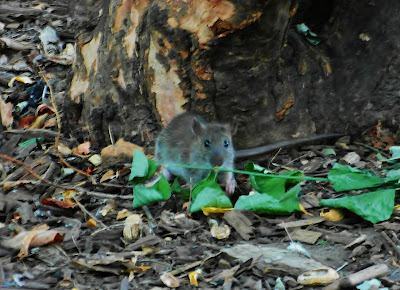 Back in March, The Villager reported that Park officials had brought Ratstravaganza under control.

However, as you may have noticed, there seem to be more rats around... not quite a return to the bad old days of July 2011. Still.

"Sadly, moronic actions like when people are dumping mass quantities of bread for the pigeons — and rats — to eat undermines our efforts," Marlow said. 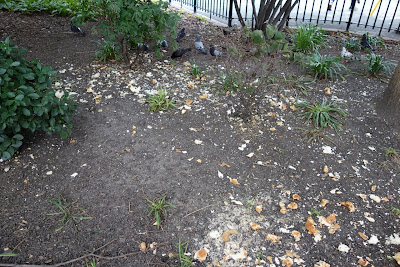 "Contrary to popular opinion, these old bread dumps are not being done by the food charities but by the restaurants across Avenue A," Marlow said. "It takes a year to improve things and a few weeks to ruin them again. So sad."

[Photos courtesy of Chad Marlow]
Posted by Grieve at 6:45 AM

I was sitting in the park yesterday morning with my fella and doggy and we were watching rats slink around. This was at 10 am. Very timely post!

Why would employees from the restaurants across Avenue A walk across the street to the park and dump their leftover bread over the fence? It doesn't make any sense. Do they really want to encourage the rat population? Has this guy seen the restaurant people doing this? Who is it? Odessa and Cafe Pick Me Up are among the restaurants on that stretch of Avenue A, and I can't imagine anyone from either of those establishments doing such a thing.

I find it hard to believe the restaurants would travel across the street to dump bread in the park. As Anonymous 9:59 asked, has he witnessed this?

I have multiple times just seen people feeding them NOT restaurants dumping bread.

I would assume the restaurants across the street on Avenue A aren't happy about this rat issue either. It's not great for their business when people are tripping over rats to get into their restaurants.

Yeah WTF is he talking about?

Which restaurants? Why doesn't he say? Or is he just making shit up?

No matter what, they had better not put rat poison down again since Red-tailed Hawks (protected by the Federal Migratory Bird Treaty Act) STILL hunt and eat rats from there. I witnessed a Hawk doing so just last night and documented it on my blog.

I play football on Sunday mornings for most of the year and go by TSP in the early morning on Sundays on a bus. On two occassions I saw restaurant workers carrying egg creates full of old bread across Avenue A and dumping the bread over the park fence. Because I was on a bus, I could not confront them. There is no question they were coming from a food service estabishment, but I cannot tell you which one(s). I am certain they are just not thinking and probably do not want to waste old bread when they can feed it to the pigeons. They need to be educated that their act of kindness towards the pigeons is harming the park and sustaining the rats. I would never make such an accusation unless I was positive about it and witnesed the acts multiple times. You all were right to question the statement. I should have provided more details. Thanks.

I had little baby anon playing there yesterday around 5:30pm and there were rats by the sandbox. Parents don't tell their kids anything in that place. I spent the whole 30 minutes just taking garbage out of my kids hands, the place is like a landfill

people throw bread on all lawns all the time. i guess they thing they're feeding pigeons or squirrels, but it's certainly rats. also, the people who hang out at the s.w. corner (homeless?) have no regard for the park. they leave food everywhere and throw their garbage over the fences and onto the grass around where they sit. i use the park 2x a day, everyday with my dog and that area is particularly disgusting and rat infested.

Is there any information on the accidents caused by the sharp edge exposed in the sandbox?

...speaking of accidents waiting to happen, was in TSP the other day and saw two small children (near the Hope statue) running barefoot... am sure others reading this thread have noticed more needles left around the park and streets (kind of like the old days?)

Would hate to hear that a child accidentally stepped on a needle... (or glass, for that matter.)