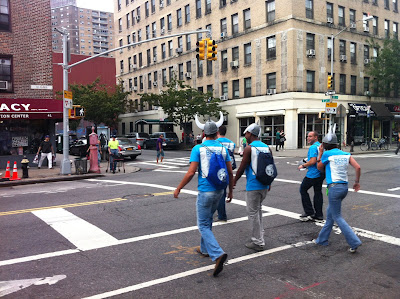 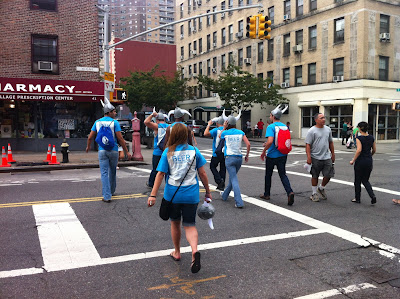 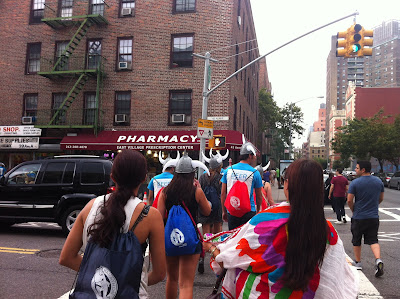 Photos via Dave on 7th.

Grieve, why are you posting photos of Minnesota?

Who actually organizes these things?

As it isn't a freshman thing, why is brig a douce do instilled in collages?

saw these morons yesterday. i still can't get it through my head that this is the East Village now.

Erik was already here, Bro. Drop the helmets, take the boat. Now we know where True Blood got the inspiration its coolest character.

So, uh, they're doing this for charity or some other worthy cause, right?

They were on fucking Avenue B!!!!!

And I wished they'd rot away. What pieces of shit.

Definitely, we should discourage young people from partaking in group activities, particularly activities that bring money into EV-run businesses.

I saw a groups of them yesterday on 4th Street, walking towards Avenue D. I thought "Boy, these guys are lost!"

I hear you. Pumpkin Patch, but does the entire neighborhood have to suffer from drunken slobs running through the neighborhood on a Saturday afternoon so that Billy Hurricane's can make money? These people are hardly shopping at St. Mark's Bookshop or any other store in the neighborhood. Worse, they all probably stopped at 7-11 for supplies.

Pub crawls are the very reason more and more douchebag bars are opening in the East Village.

Defending the Indefensible. Does the micro economic well-being of the EV now have to be based upon an alcohol intoxication/twitter model, promoted by the Woo Foundation?

you totally destroy any hope i had for this neighborhood - or what's left of it - your economic development is to encourage more bars and more brainless drunks. they don't need any assistance except for how to get a cab out of here.
these folks do nothing for nobody except the liquor lobby.
find another neighborhood to help.

I'm sure packs of drunkards, staggering their way through the streets, acting like the poster children for affluent, privileged, drunken pieces of shit are FABULOUS for the EV-run businesses! They were great for my super who constantly has to hose their vomit off our front stoop.

I bet they headed right into that pharmacy and bought plenty of things!

Yes, They're going to that pharmacy to get ECPs and condoms. Wooooooooo!

Seriously, I'm so sick of people complaining about these frat boy d*bags. I hate them also. I hate when I have to walk in the street because they've overrun the sidewalks by smoking outside of the bar they're hanging out at while being obnoxious to the neighbors who live above that bar. HOWEVER, stores and restaurants are going under left and right in our neighborhood. For far too many years I've watched good places close because the people in the neighborhood don't support them. The ones that do stay open get the support from these idiots on the weekend and allow them to serve good food to the rest of us the other peaceful 5 days a week. Stop your whining, be grateful places you like are here because of them, and maybe learn to actually support your neighborhood bars and restaurants instead of complaining about those who do instead.

You ask "Who organizes these things?" Fear not: the festivities were sponsored by three outstanding East Village businesses:


as you can verify for yourself here:

Proud sponsors of the 2012 Beer Marathon

The East Village, where bar crawlers are "drinken slobs" but homeless alcoholics sleeping in a pool of vomit and feces and/or lining up for blocks every Saturday for free soup are "the working man".

This generation is so dull. They add nothing to the city. Why move here to spend every waking hour binge drinking. They can do it cheaper back at the trailer parks they stumbled out of.

If they were tiling lampposts you'd call them misunderstood geniuses.

@5:26 But instead, they're wearing viking helmets and guzzling beer and we're calling them assholes.

A little more than we want to admit, the EV's culture is a byproduct, in part, of drunks and junkies. Where you complaining about young people smoking outside and throwing up on your doorstep 30 years ago when they were doing the same (just wearing different clothes and their preferred intoxicant tended to lean heavier)?

Ha! They'll never be confused with misunderstood geniuses. Alcoholics maybe. Losers for sure!

Sorry, but it's NOT the same as 30 years ago. 30 years ago people scored their smack and went back to their apartments to shoot up and pass out. They didn't get together in mobs and go binge drinking from bar to bar, weekend after weekend.

I'm not saying junkies are admirable for their antisocial behavior, but it's not the same.

stores close because of greedy landlords and a climatce of ZERO protection for long term or mom & pop business, these idiots have no idea what stores are good and have nothing to do with any "vibrancy" or diversity in the neighborhood, retail or otherwise, they shop in 7-eleven for groceries for godssake, they are self centered vapid scum who care nothing for culture, the neighborhood or their fellow man, they will never contribute anything positive to society and i strongly advocate being hostile to them when you see them on the street, especially calling the girls "fat" really gets to them, these morons have the run of the whole city, SOMEONE needs to put their a$$es in check, why not YOU!
p.s. even the crusties and the gangs from the projects are about 50 million times more polite and socially adept than these monster douches. the crusties could literally teach the fratiots a class on manners and functioning in polite society. take your trolling sh*t to a lesser blog.