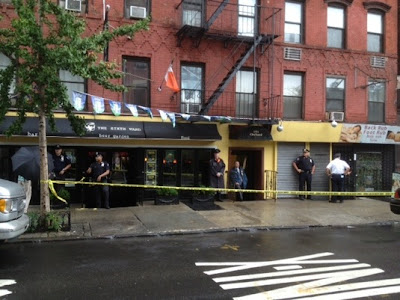 There are multiple reports today about a 29-year-old woman who was found "bleeding heavily from a neck wound" at the foot of the stairwell on the first floor of 191 Orchard St. this morning. The woman, identified as Carlisle Brigham, was declared dead at Beth Israel.

According to The Wall Street Journal, the woman was staying at 191 Orchard St. just south of Houston temporarily ... and that she was estranged from her husband, named as Anthony Lindley Champalimaud. (Here is their wedding announcement from the Times.)

The Times is reporting this afternoon that officials are still investigating whether her death "was a murder, a suicide or an accident."

The daughter of prominent investment banker found, throat slashed on Lower East Side. Who killed Carlisle Brigham-Champalimaud? EWN at 5PM.

Updated: Here is the WABC report. 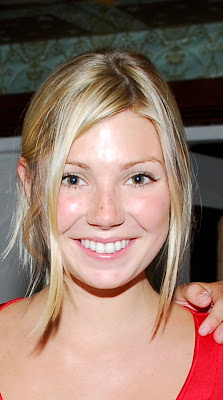 Updated 7:54 p.m.
The Daily News reports that the victim's husband was believed to be working in London. He is reportedly vice president of development for YTL Hotels and Properties.

Updated 9:23 p.m.
Police sources told DNAinfo that "it appeared that Brigham had fallen on the steps, cutting the side of her head and neck, and was bleeding heavily when she was found by a neighbor." Also, police did not find a weapon at the scene. In addition: "Sources said she had been drinking Monday morning and called another male friend to tell him, 'I am not happy with my life.'"

Updated 6:30 a.m.
According to the Post, this happened "possibly after tripping on her high heels following a night of drinking with college pals."

There was so much blood around Brigham’s neck when her body was found at 10:33 a.m. that investigators initially theorized she’d been slashed.

But they later said it appeared to be just a tragic accident, during which she shattered her chin on a step of the first-floor stairwell in the building.

Wonder if the cops interviewed the gentleman who hangs out on the benches around American Apparrel. Don't know his name but he's always there. He could have seen something.

accident? whoops, I slashed my own throat? Come on.

I believe it was a fatal accident and this young, beautiful woman fell down a steep flight (or flights) of stairs.

A knife was found at the scene

Whatever happened, my thoughts and prayers are with her friends and family. How awful.

More often than not, initial reports are innacurate in the rush to get the "news" out. An investigation by both the police and the Medical Examiners Office wil determine the cause of death, and that takes time. A tragedy regardless the cause.

Another low point for local media. Throat slashed WABC? Shame on you for your scary, attention-getting ratings boosters. And shame on the slimy reporters I saw hanging around the scene, begging anyone for information and access to the building.

What a horrible tragedy/accident. She seems to have left behind a lot of people that care about her.

more and more people are realizing the major media sources are complete garbage.

Seriously am sick to my stomach... Don't comment or give your opinion on what you think happened. The news is not always accurate, you can't believe everything you hear. I know the friends she was staying with.. they are devastated along with her friends n family. PLEASE have some courtesy and respect for everyone affected by this tragic accident. My prayers are with her family, as they should be by everyone else.