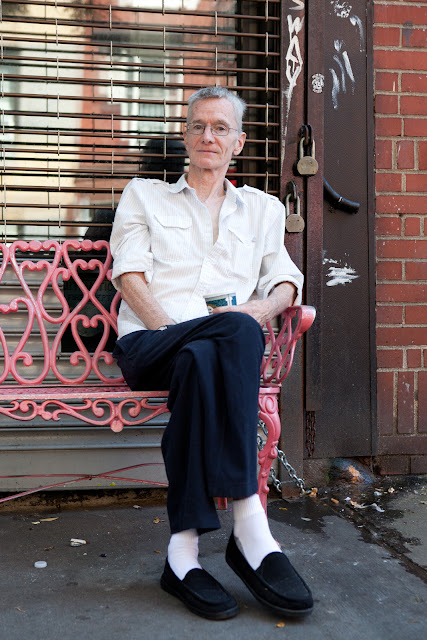 "I’ve lived in the neighborhood for 30 years. I was a doorman on the Upper East Side. The difference between the Upper East Side and here was like night and day. I worked for gazillionaires. What they paid for shoes and clothes, I could pay my rent for 3 months.

It was a different neighborhood 30 years ago. It was dangerous but I never felt really threatened. You just had to know your way about, where you were going, and what you were doing. Half this neighborhood was burnt out; every block had burnt out buildings. It was really empty. If you weren’t from around here people knew it because it was so depopulated.

I moved down here by accident. I was in love with this girl and we were in the throws of breaking up. I grew up in Queens. I had no intentions of moving down here, especially back then when this neighborhood was the way it was. But she moved here and I followed her. I thought maybe we’d get back together but it never happened and I ended up staying.

It was quite an accident and it changed my life. I met some wonderful people: artists, writers, and creative people. It’s always been a young neighborhood, but it wasn’t college students, it was young people on the fringe. It was quite some fun. You had the Robots; you had EPCs; you had the Limbo Lounge; Pizza a Go-Go; the Pyramid Club was in full swing. I got exposed to a lot of things I wouldn’t have been exposed to in Queens. There were some heartbreaking things too; I lost a lot of people to drugs and to the AIDS crisis.

They filmed 'The Godfather Part 2' on this block. All these buildings here still had the old fashioned storefronts. They were sealed up, but they all had the old-fashioned storefronts, so they fixed them up and created a barbershop and a candy store and put canopies on them. It’s the scene where that guy in the white suit [Don Fanucci] is going down the street, where he gets blown away by Robert DeNiro in the hallway. That’s where a lot of these trees came from, because the block association said, 'if you’re going to disrupt our lives we want some compensation', so they agreed to give them money for these trees."

I love this feature. Despite all the change and weekend insursions, real people with real stories still call the EV home. Thanks, James.

that was a good one.

This is how you do it. Real. People. Way better than that condescending, offensive, and ignorant Humans of New York.

Always great to see real, interesting and intelligent people still exist in the East Village. Gives me hope in the current zombie takeover. Thanks for this series.

I'd like to point out that what do we get these days for all those awful self-righteous film -crews? NADA. and what leverage do citizens of NYC even have these days against the bloomberg-media-industrial complex? NADA!
it's time to start being vocal about this bleeding of civic/civil liberties! we are headed straight towards a police state, make no mistake. the time to try to prevent this is NOW.

@glamma
It's because there aren't block associations anymore.

Terrific interview- one of my favorites in the series. Keep 'em coming!