Yesterday morning, the body of 29-year-old Carlisle Brigham was discovered on the first floor landing at 191 Orchard St. Early reports indicated that foul play may have been involved.

However, DNAinfo reports that an autopsy today found that Brigham suffered "blunt impact injuries of the head and neck," per the Medical Examiner's Office.

According to the Post, this happened "possibly after tripping on her high heels following a night of drinking with college pals." 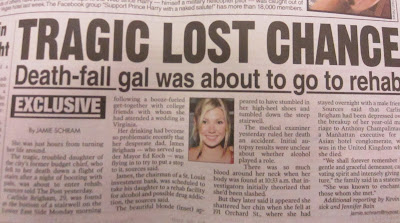 As you can see, the Post reported today that Bingham's father "was scheduled to take his daughter to a rehab facility for alcohol and possible drug addiction, the sources said."

The Daily News reported today that Bingham had been living on Avenue B since the separation from her husband. Unnamed sources told the News that Bingham returned home late Sunday after she had attended a friend's wedding in Virginia ...and that Bingham "had partied so hard she had to be carried into the building" on Orchard Street where she spent the night Sunday.

[A] longtime friend and neighbor of Brigham’s, who did not want to be named, did not believe she was drunk and said she only spent the night away from her sublet because she forgot her keys at the Virginia wedding. “She wasn’t a drinker,” said the friend. “She was building a career after a bad marriage. ... She was happy.”

Updated 8-29:
The New York Times has more on her life and death here. The paper notes that she was supposed to meet her father for lunch on Monday.

As he drove into the city from La Guardia Airport they talked by phone, first at 9:25 and then at 9:30, he said. Shortly afterward, her body was found by a 19-year-old neighbor, at the foot of the stairway. She was dressed entirely in white, with the contents of a large, clothing-stuffed weekend bag around her, according to interviews he gave NBC News and other outlets. Her father arrived just after the ambulance left the building.

The News should wait 1 to 2 days before they report anything, given that they are often more concerned about being "the first to report" than they are about actually disseminating FACTS. Woman's throat "slashed??;" awesome headline, print it!

This is awful. Reminds me on the incident earlier this year where the drunk guy stumbled into the street and fell and got hit by a motorcycle. With all the binge drinking going on in the neighborhood, these things are bound to happen. But it's sad to see anyone so young die over something so stupid.

I was consciously thinking about all of this today, how sad it is that what seemed like such a beautiful life was so quickly deatroyed. My own tenement stairs are so incredibly unsafe and it shudders to make me think how this happened. Thoughts and prayers for her family.

Where's the guy who was calling me names because I had the audacity to say alcohol is a dangerous drug?

Any drug is dangerous... But let's keep te dream alive...

This entire thing sounds fishy to me. A 29 year old binge drinker? Something else happened here.

Life always hangs in the balance. Enjoy every moment, people. You never know when it will suddenly just end.