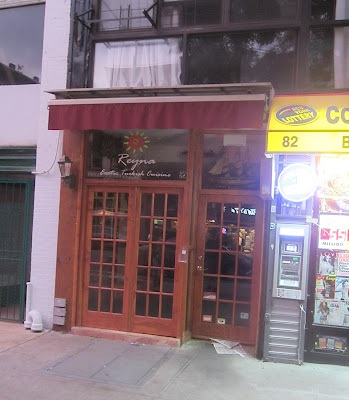 Reyna Exotic Turkish Cuisine quietly opened at 82 Second Ave. (the former Mission Cafe space) back in the middle of June... and it has looked closed of late. The above photo is from a few nights ago... paper now hangs in the window... the always-reliable fellow at the deli next door said that the owner was "impatient" and decided to close...

However, another tipster on the block said that the owner will likely reopen with a different concept. Back in February, Crain's reported that the owner had signed a 10-year lease here.

The food there was really very good. Like my grandma's used to make.