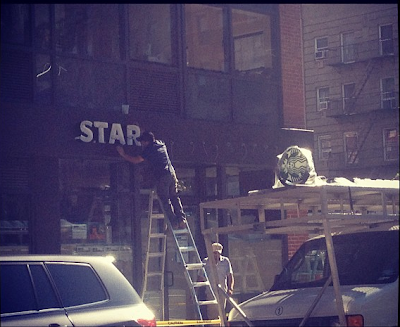 We've heard from several alarmed readers that the Starbucks signage is up at 219 First Ave. at East 13th Street, as we first noted in April. 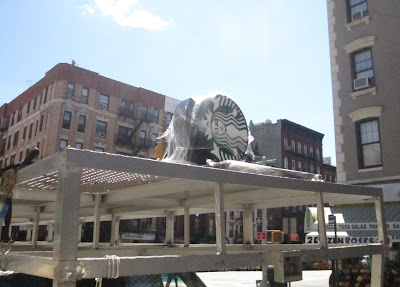 By the way, does anyone have photos of the former tenant here, the Mee Noodle Shop, a favorite spot for Allen Ginsburg...?

What it costs to live in newly renovated apartments above a Starbucks in the East Village
Posted by Grieve at 11:41 AM

Insert nail in coffin. The Bloombergridade is marching in. And then when they've infested the place with the lowest forms of corporat-ization (the equivalent of fleas), then they jump ship to another part of the city, and their fleas keep on following them.

There's absolutely no stoppin this, unless you find a way to stop it.

Property owners only allow you to believe that the residents define a neighborhood.

Amazing - another place to get my caramel latte fix with chocolate sprinklings - just hold the horrible coffee.

I have no idea why someone would go to Starbucks when we have so many great coffee shops in the EV.

I know why people will go there: ignorance. The clientele will be the new residents, BRAND new residents, temporary but infinitely replaceable brand new residents of the EV, largely thanks to NYU's every semester dumping of them on us... They know Starbucks (like they know Subway and Papa John's and CVS) but they have no awareness at all of how much better (for instance, and within a couple of blocks) Everyman and Ost Cafe are. Also, given the proximity to 14th Street shopping and to NYE&E and Beth Israel and their workers and patients the jig is up. Just part of the avalanche or black hole (chose your metaphor) of gentrification. Bummed.

at this point, starbucks doesn't even bother me that much anymore. at least it's a coffee shop and not a greasy fast food place or another bank. it's all relative for me i guess.

Agreed. I've given in to Starbucks...at least versus a block-long Bank Of America. Good lord those are the worst.

Heres some photos of Mee from yelp.
http://www.yelp.com/biz_photos/M76xLivSbPiPAF8lZpwSVw?select=tDJXm5ZknCCzcg5Zg9sTfw#-VMmi-tMcMO7bR90aCg_iA

There are other Mee Noodle Shops. They're a chain too.

Everytime you walk by a chain in the East Village, give a big THUMBS DOWN to all the horrible patrons inside!
Public shaming is one of our last available resources.
I have been doing this and seriously, people actually do get offended.

Yes, glamma, I'm sure insulting random strangers will certainly change things. How about going in and having a nice conversation with them and telling them all about the other great places to get their fix. It takes a bit more effort than an immature hand gesture, but at least you'll actually be helping instead of, well, whatever it is you like to think you're doing.