Fu Sushi has closed on Avenue B 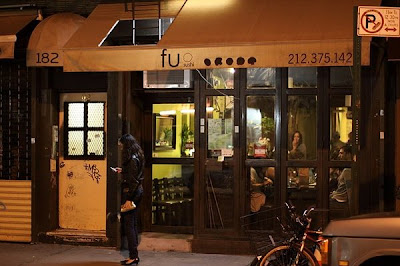 EVG reader Faces brings word that Fu Sushi has closed on Avenue B... Saturday was their last night in business here between East 11th Street and East 12th Street.

In June 2011, the DOH temporarily closed Fu Sushi ... and there were reports that the restaurant stayed open on a weekend despite the closure... (inexplicably) prompting three damning articles by the Post, who, after all that, never bothered to note that Fu Sushi had reopened.
Posted by Grieve at 6:05 AM

Email ThisBlogThis!Share to TwitterShare to FacebookShare to Pinterest
Labels: Fu Sushi, restaurants that are now closed

Never liked this place and am glad they shuttered. They chose to open on September 11th, and every year on that date they had a board outside urging people to come in and party for their anniversary. I know life goes on but I always found it incredibly tasteless - they couldn't have opened on the 10th or the 12th to avoid such a sleazy "celebration"?

Well Gojira, its closing, so it looks like the terrorists lost this one.

Wow this came and went and I never noticed it. Or I blacked out for the past year or two. I am stunned. Thanks for sharing.

Apparently they closed so that they could find a larger location.

overpriced yuppie sushi, no thanks

A lost in the LES, Obviously some people can only appreciate or maybe afford cheap eats. And, they are looking to expand i'm glad i'm on there guest list, ha... only down part is now i have to go further to get quality sushi in this neighborhood... best uni and salmon in town by far...