About that 'terrible screeching noise' on East Ninth Street

A more specific sign has arrived on East Ninth Street between Avenue B and Avenue C ... we posted a photo of the first sign yesterday... it was a little skimpy on details... 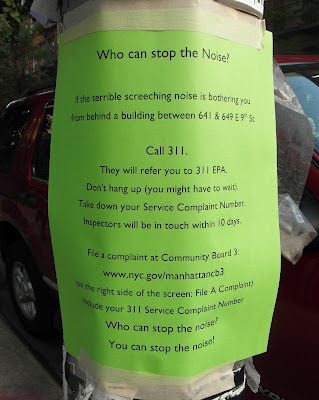 And a reader left this in the comments:

The noise is a high pitched sound that sometimes sounds like a whine and at present more like a shriek that varies in pitch. It's affecting people in the upper stories, especially at the rear of buildings on the eastern half of 9th and 10th Streets between B and C. It continues 24/7 for days at a time. It first began last Thanksgiving and returns intermittently. The latest episode has lasted more than a week and those of us affected are getting pretty desperate, as the sign indicates. Calls to 311 have got us nowhere so we've now appealed to CB3 to use their influence with the DEP. As the sign indicates, we can't trace where the noise is coming from but it's most likely a ventilation system.

Did Lana Del Rey move to the neighborhood?

My block at 7th and 1st suffered from this for months. It turned out to be a rusty roof ventilation fan spinning in the wind.

I jammed a piece of wood into it and the neighborhood has been quieter ever since.

I lived next to a grocery store and whenever it rained the fan belt in their compressor, or whatever is on the roof, squealed this awful high pitched noise for days. I rallied the neighbors and we called the store repeatedly. We also called 311 and told the store we were calling 311 until it was fixed. They took care of it.

Should also report to the ACLU for inflicting torture on the neighbors. Hope they find the source and get it resolved soon.
Keep us posted.

WD40 works better than a chunk of wood