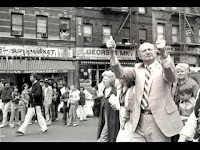 Here is his obituary at The New York Times.

Facebook is filling up with thoughts about Hizzoner. Via The Lower East Side Preservation Initiative:

His term corresponded to the 1980s artistic renaissance in the East Village and, not coincidentally, the first giant wave of gentrification. His often brash, contentious, energetic and multifaceted personality seemed to many to personify the character of the city itself.

Several people have sent along this interview with The Daily Beast from 2010... in which Koch discusses the Tompkins Square Riots of 1988...

Mayor Koch will always be my mayor. Many of us thought that we were going in the right direction when Bloomberg came into office. I thought anybody but Giuliani. I thought that not pushing out squatters was a good sign, and allowing our community gardens (this was Spitzer) to stay was a good sign as well. It was post 9/11. It really hasn't been until the past 6 years that we realized what had happened to our beloved city and EV/LES. Bloomberg took it all.

I don't think that Mayor Koch knew how in the name of progress (safer parks and controlled public spaces), along with rezoning (not anything to do with capitalism but rather a forced demographic change), actually displaced working class people.

For anyone crying about Ed Koch...Koch became a very right wing Zionist supporter of Israel after he was Mayor. He was really a Republican and supported Republican candidates and far right policies. He remained silent as mayor while thousands were dying of AIDS in NYC. His cops attacked the Lower East Side in the now infamous 1988 police riot.Police murders of people of color were completely out of control under Koch. He will not be missed by me.

I can't really think of a more difficult job than being the mayor of Gotham. Maybe being Prez might compare.
And 'dis guy....'dis guy....NuYahk true and true, danced the fine line tryin' to please everybody.....which is always a dangerous game.....at least he had style....he was a contendah'.

I don't get all the praise for Ed Koch. The city was a complete disaster when he was mayor.

John Penley When people were dying all around me from AIDS Mayor Ed Koch who was worried people would ask him if he was Gay if he said or DID anything to help or about it REMAINED SILENT. He was never silent on anything else in his life. It is also reported that Koch was worried that if he mentioned AIDS it would scare tourists from coming to NYC. I compare Koch to those who remained silent during the holocaust and AIDS was a holocaust as far as I am concerned.

Good riddance. This clown destroyed NYC almost single-handedly. Then Rudy finished the job. No tears here...not any at all.

I also don't get this praise. As mayor, he contributed to HIV / AIDS getting horribly out of control by taking no action for years. "And the band played on" nicely describes Koch's shameful behavior as the killer disease was ravaging NYC and spreading out of control.

He wrote bad film reviews for the Villager for a few years.

Nobody would go near AIDS/HIV early on. The people who organized and did something in the early stages of the crisis were Act Up, Housing Works and GMHC. Act Up was the first, later joined by the others. Act Up came about during the Koch administration. Housing Works became the most radical because of their focus on housing for people of color, and active drug users.