Scott Stringer has big plans for the East River 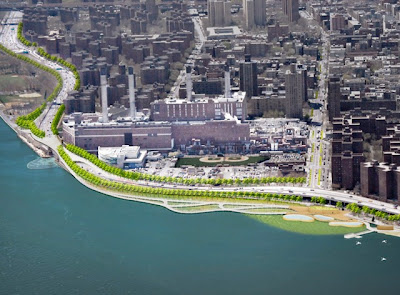 Manhattan Borough President Scott M. Stringer is giving his annual State of the Borough speech tonight ... and part of his talk will include his vision for the East River Blueway Plan, which will "reconnect residents with the riverfront," as The New York Times reported.

The plan won't be unveiled officially for a few more weeks, but the Times got a sneak peek.

Of particular interest around here:

One proposal — the most costly to execute — would elevate the bike and pedestrian path over the F.D.R. Drive at 14th Street, where the path currently narrows to four feet near the Consolidated Edison substation.

The plan calls for a new pedestrian bridge that would rise gradually from blocks away, allowing users to avoid that difficult bottleneck. The bridge would also serve as an inland sea wall that could help prevent flooding and an explosion like the one that rocked a substation during Hurricane Sandy, which contributed to the blackout across Lower Manhattan.

Read the whole article at the Times here. Gothamist has more details and renderings like the one above right here.

Avenue C and East Eighth Street on Oct. 29, before the power went... via Daniel Scott ...

That's great. We all like jogging and biking over there but the bottleneck really sucks. When it's busy you practically have to raise your arms and sidestep your way through.

They have to do something to protect that substation. Considering bike riders and pedestrians is a definite added plus. That narrow stretch between the substation and FDR is a pain in the ass, esp in the warmer weather when it's crowded on the path.

I echo the above. Couple this with the UN trading their waterfront rights so that the bike/jogging path will run all the way up to 125th or so and things are looking up.

Thumbs up! Love running on the riverfront, hate the bottleneck. The seawall design idea is awesome, too.

On a tangentially related note, anyone know what the heck is going on with the bikeway being closed and when the construction's slated to be over? I ran by the Houston onramp this morning and it was totally fenced off on both ramps - couldn't get down there.