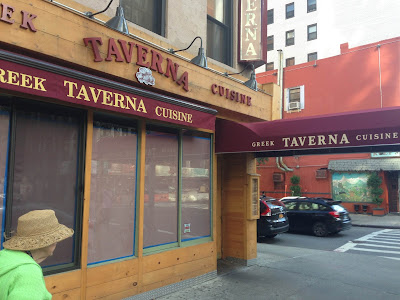 EVG reader Patti passes along word that Taverna, the Greek restaurant that took over the Lyric Diner space on Third Avenue at 22nd Street, has apparently closed after six months.

There's paper over the windows ... and no note on the front door ... and no word of a closure on the restaurant's Facebook page or website. The Lyric closed last August without a note... though one appeared a few days later... Taverna was opened by the same ownership in February.

pcvstBee first reported on Taverna's closure on Tuesday.
Posted by Grieve at 5:10 AM

But then again I did spot that there's a new Greek restaurant opening on the east side of first Ave just a little south of 14st (a convenient walking distance from the $6200 month loft you've mentioned). It looks promising. Do you have any details ?

@Choresh Wald, is it in the space under the eternal construction shed where that Mexican restaurant came and went quicker than The Flash?

Been meaning to do a post on this... the space on First Avenue will be Taverna Kyclades, which has a location in Astoria. They were on last month's CB3/SLA docket. It was Agave Azul ... and David's Bagels...

Is it too late to resurrect the still-twitching Lyric Diner?

Good to know, thanks -

Food at the Astoria Kyclades is awesome but it's a pain to get there. I hope the food at the EV locations doesn't get all "artisanaled" just because it's in Manhattan. Straight Greek is fine with me.

Knowing the owner it will probably be a Mexican tequila bar with Greek appetizers, or anything with loads of alcohol.

The previous manager at The Lyric used to complain al the time about the rent, which was $14,000/mo a few years back and is probably even higher now.

To try to survive, The Lyric tried all kinds of tricks to squeeze more money out of customers, including forcing you to get french fries with the eggplant parm and other sandwiches, for which they charged an extra 3 bucks, and cutting back on the hours for the early bird special, but nothing worked.

The waiters at Lyric had no advance notice of the sudden closing and were all out on their asses, so they hustled over to other diners and started telling juicy stories about all the money problems they were having at the diner, including issues with taxes and also their tips which I won't get into.

Even though it looked cool, they probably made a mistake leaving the old Lyric neon sign in place since many people didn't realize it was a pricey new Greek restaurant, so when they finally changed the sign to the new name it was probably too late. I hope they bring back a shiny new diner, the neighborhood needs it.

I loved the lyric diner when I lived down the block.

Tasted even better when wasted at 2am.

Their problem is they didn't serve Hoboken biscuit froyo in a hoof.

What a shame. That was without one of the best diners in NYC, and when I lived there, it was nice that it was in my 'hood.

When owners get itchy for something new and forget their established brand, that's when everything goes wrong. Lesson learned for Lyric Diner. Too bad they won't be able to re-create the old interior -- and might not even have enough money now to restart the old thing.

I walked by on Tuesday afternoon and they were open, owner was actually outside at the moment. I liked it and I'm sad it's gone. Orion around the corner is decent enough for a standard deli, I really hoped these guys would make it.