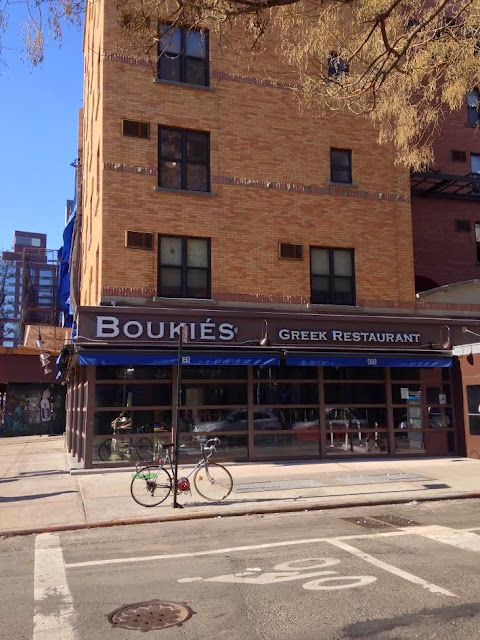 Boukiés, the Greek restaurant run by Pylos owner Christos Valtzoglos and chef Diane Kochilas, has apparently gone out of business.

The outgoing message for the nearly two-year-old restaurant on Second Avenue at East Second Street says that they have "permanently closed." There isn't a mention of the closure on the restaurant's website or social media. Signs on the restaurant say they are closed for renovations. 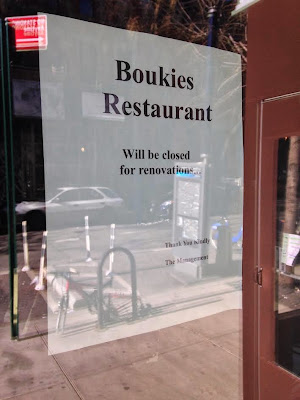 A shame, it was a good spot with delicious food.

Thank you to @SlickSean for the tip.
Posted by Grieve at 5:20 AM

Email ThisBlogThis!Share to TwitterShare to FacebookShare to Pinterest
Labels: Boukies

I enjoyed the food there. It's a tough location though - there is basically a lake there on the corner when it rains and it often smells like sewage. Of course, there is all that construction next door, as well. It also didn't help that since the place was so big, it looked empty even when people were there.

Yes, I think the size of the place did it in. It felt chilly amd cavernous--the opposite of Pylos, whose cozy design is one of its best features. I imagine the same thing did in Heartbreak, which I had wanted to try but never got around to.

Agreed, the space needs to be split in two and made cozier. This is an unfortunate 80s-style space, when giant, cavernous restaurants were considered chic, but I think people now want things a little more intimate. I ate at Heartbreak, and it was really schizophrenic - the food was delicious, but when I think of Germanic restaurants I think of small, dark, clubby spaces, not the echoing, hard-edged, brightly-lit football field I was sitting in. Not welcoming at all, and I never went back. Apparently mine was not a minority opinion.

Never tried the food (because I can't stop going to Pylos for my Greek food fix). But the space Boukies was a turnoff for me anyway.

While I am sorry to see Boukiés closed, I want to set the record straight as far as my involvement in the restaurant. I helped create the first menu. I never owned nor was involved in running Boukiés and I have not been involved in the restaurant at all since those first opening weeks nor have I worked with Mr. Valstoglou in any capacity for well over a year now.
I am now the collaborating chef at Molyvos Restaurant, a position I took on as of Jan. 1, 2014.
Thank you,
Diane Kochilas

I ate there a couple of weeks ago, I really like that place, good food and although it did not have an EV atmosphere it was pleasant inside. I know they did not sell alcohol besides wine and beer. It makes you wonder how much a restaurant depends on its bar income to survive. Places like this are not rowdy sports bars which there are too many of these days.

Just part of the ongoing unsustainable nature of the east village heroin economy. these landlords expect everyone to be selling a product marked up 1000 times from its actual value.

This is really too bad. I think the timing was quite unfortunate, as well as the location. I dined there a number of times with my wife, who is Greek, and absolutely loved it. But it's not the best corner, especially in the winter, and the construction didn't help. Really sorry to see it go.

There are a 1000 and 1 great intimate restaurants in this neighborhood. But sometimes you don't want to go Uptown or Downtown to stretch your arms, and this place offered that. Great food, a relaxed atmosphere and space at a reasonable price. The corner table by the window was amazing - you were practically outside. Sad to see it go.

I enjoyed the food, but it had the bad combo of big space and high price. I'm sure there's a mathematic equation that can figure price point per square foot. Upshot: the bigger the space the cheaper the food needs to be. This place didn't have it and it struggled from the get go. No surprise at all.

I say good riddance. This is one of the joints that selfishly occupied about 2/3 of the sidewalk space every warm season. Enough with the outdoor searing going beyond its allowable limit.