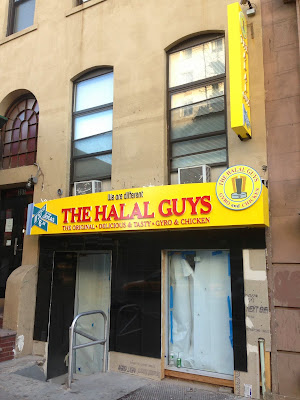 Food-cart favorites The Halal Guys expanded to the East Village last Sept. 19 with an outpost on the northwest corner of East 14th Street and Second Avenue...

Soon after, signage for a Halal Guys restaurant appeared at 307 E. 14th St. (immediately adjacent to the new cart).

Now that restaurant space has seemingly been dormant for months. What's up with that?

While building the store it became apparent the old gas lines at 307 E. 14th St. could not support both the Halal Guys' kitchen and the apartments in the building, Ahmed said.

Halal Guys has spent the last few months replacing the lines at their own expense and are now waiting on Con-Edison to connect the pipes to the main grid.

If all goes well, then the restaurant should be open in May.

Meanwhile, there is the cart right out the door.

The Halal Guys are apparently opening their first restaurant in the East Village
Posted by Grieve at 1:22 PM

Email ThisBlogThis!Share to TwitterShare to FacebookShare to Pinterest
Labels: The Halal Guys

I have eaten a lot of halal throughout the city. I have to say they are one of the best for their style of halal. If someone knows better please let me know!

You know connecting the new pipes to the main grid takes time. Especially when Con Ed first has to make lots of itty bitty signs warning us about the stray voltage that can fry us to a crisp while we walk the dog on E 9th St.

@Anon 9:28am. Not even close. Rafiqi's cannot compare to the Halal Guys

I definitely prefer Rafiqi to Halal Guys, but the King of Falafel & Shawarma at 30th + BWay in Astoria is also really good.