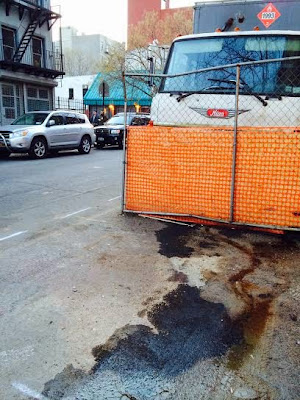 It appears that one of the temporary boilers that remain on East Sixth Street at Avenue C outside the NYCHA-owned building is now leaking oil into the street.

Good thing that Sen. Schumer and Mayor de Blasio announced yesterday that $100 million in federal funding will be used to replace temporary boilers in New York City Housing Authority buildings damaged by Hurricane Sandy.
Posted by Grieve at 5:00 AM

Thanks for the info - NYS Dept. of Environmental Conservation is sending an investigator to the location, to get the leak fixed and the street cleaned up - NYSDEC Spill Response Supervisor

EVGRIEVE serving the public good since 2008!

If you look at the tree's that canopy above these boilers they are destroyed by soot. Hopefully they aren't totally dead.