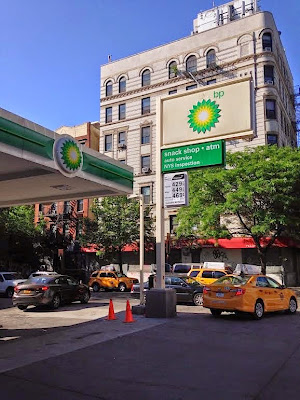 Late last month we heard a rumor that the BP station and MRM Auto Repair at 24 Second Ave. at East First Street would close in the coming weeks.

This has been confirmed. On Saturday, workers were hauling away equipment for MRM … 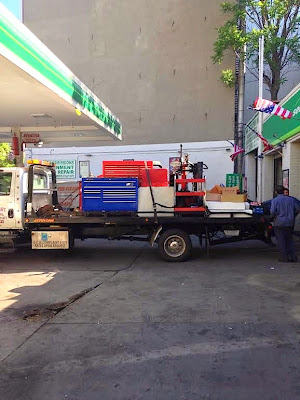 … which is relocating to West 38th Street … 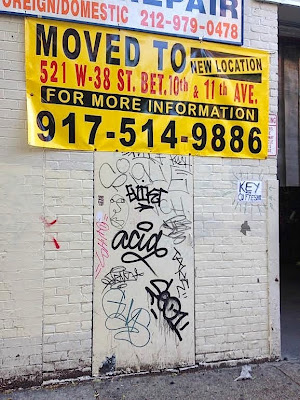 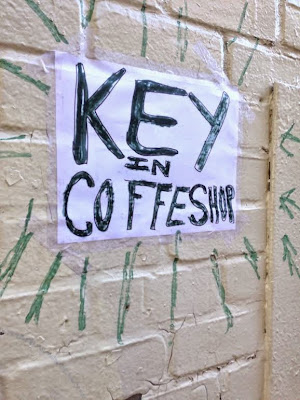 A BP employee told us that the gas station and snack shop will close by the end of the month.

As we've pointed out, the East Village will no longer have any gas stations within a year or so. In March, Hakimian Property filed plans to erect a 9-story mixed-use building on the site of the Mobil station on East Houston and Avenue C. (The station was expected to be open until next year.) And nearby, the BP station on East Houston and Lafayette will be home to a new luxury development one day.

As for what's next for the BP property on Second Avenue, the word is a boutique hotel. There aren't any building plans on file with the city at this time.

A hotel? That area is a dead zone.

ANOTHER hotel? So dumb, so unsustainable. Too many, all sitting half empty.

seriously, if you have a cab or a car, where are you supposed to gas up down here?!?

If CitiBikes needed gas we would have a gas station on every corner. The obvious solution is to switch all CitiBikes over to gas power. Problem solved.

Hopefully it will live on in your Facebook profile pic though, Grieve.

No good -- but isn't there still a BP gas station on 2nd Avenue by 4th Street? Or did that one close too?

Wonder where all the cabs will go? TO the houston st place near c?

So much for "urban planning".

the fewer gas stations, the better. people switch to hybrids or plug-ins, and we all win. really nothing to complain about, except what's replacing it.

The EV doesn't need another boutique hotel. What we don't already have is a boutique campground with a lake, grass and trees, and little luxury Twin Peaks type wood cabins with barbecue pits outside. Maybe with a mini mountain with snow making machines for skiing in the winter too.

There is a station at 23rd and the East River, and there's one up on 125th Street and I think 2nd Ave...will our consumer advocate do anything to the rental car companies who are going to love this and their $8 a gallon a charge when you bring it back partially full - or the total rip off of "Buy a full tank at rental and don't worry about refilling", just feel good when you drop off the rental with half a tank for which you won't get reimbursed. Where are the plug in people supposed to plug in, by the way? Run a cord into their apartment? Get a homeless guy to wire the light pole for them? Maybe they will find a use for the phone booths, and only allow electric cars to park next to them. more restrictions. more tolls. more fines. more total state control.

Yes, nothing to complain about indeed! I'm sure you'll pay for all of our new cars and push for those non-existent charging stations right? Or should be just run a cord from the lamp pole...

Since I get all my furniture and other assorted items delivered by rickshaw, I have nothing to complain about. Plus they offer a flat fee going to the airports. No charge for baggage.

It's all earth hugs and granola picnics until you need a vehicle to deliver your next Fresh Direct order. Hope they can find gas before they deliver your soy milk.

Gas doesn't have electrolytes and it ain't artisinal nor trendy.

And it's not served in a hoof!

I can't wait for the new boutique hotel on that corner. The biggest rats I have ever seen live there. I actually had a sick one, with blood oozing from its eyes, literally walk over my foot one day. I enjoy popping in to a glam "hotel" bar once every three month or so. And that hellish corner has been a blind spot for the eons I have lived around the corner. A civilized thing to do across the street from the very fabulous Cock is certainly better than a boring, rat infested gas station..

"Hope they can find gas before they deliver your soy milk." Very funny! Cracked me up.

well i'd say the resistant-to-change curmudgeons on this site have really jumped the shark into full-fledged caricature - boo-hooing the loss of a rat-infested gas station! it's just too rich.

Anyone who can say the words "very fabulous" and "Cock" in the same sentence, referring to that godawful bar, is seriously in need of some heavy duty re-education.

the new building is all glass. Lets hope Puck learns to throw stones

We have been using Manny and his guys for years to repair and inspect our cars. Honest and reliablle and the added bonus of having your car parked on 1st St when the repair is finished. And kind of 24 hrs. What will we do? Good luck Manny,

Yes, it's just too rich to have the neighborhood continually wiped of necessary - yet untrendy - services like laundromats, tailors and gas stations. How dare we exist with our pedestrian needs when there are boutique hotels to be built! The nerve of us!

if you want a gas station on every corner, you can go to Jersey, Queens, or any other outlying area - gas stations on every corner! me, i'd rather have one less place to fuel up cars with gas, the drilling, refining, and burning of which contributes to the strength of the storm that destroyed much of the area 2 years ago. gas station tanks pollute the ground water. cars waiting in line for gas significantly worsen the air our neighbors have to breathe.

and lumping a gas station - and one affiliated with corporate environmental criminal BP at that! - in with actual mom & pop businesses like tailors and laundromats is laughable.

And there you have it folks, if you like gas stations then move to...

yes, I was being ironical.

"if you want a gas station on every corner, you can go to Jersey, Queens, or any other outlying area"

"Every corner"? Please cite specific corners that you see gas-stations at.

Perhaps the swells can't imagine it, but some of us old-skool types use our vehicles to help make the rent; I hustle small moves, personal transportation, airport pickups, with my little truck. I pick up the perfectly good stuff that you swanky types throw out without a thought, and either take it home to use or try to sell. Having gas stations and garages in the area makes this much more practical for me.
Not any more I suppose. Enjoy your hotels and fancy restaurants.

I'm all for any business that pollutes the neighborhood. When do the coal plants move in? Yum!