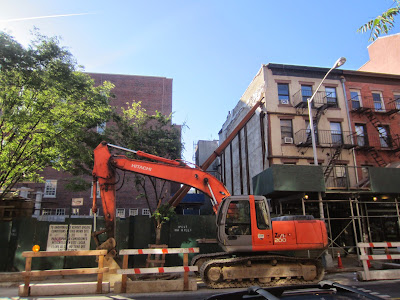 Time to check in again on 185-193 Avenue B, where a 7-story mixed-used residential building with 41 "dwelling units" is in the works for the corner here at East 12th Street. The building will include the new home of the Elim Pentecostal Church. 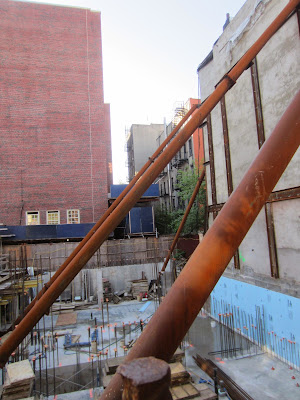 Workers have been pouring the foundation of late … 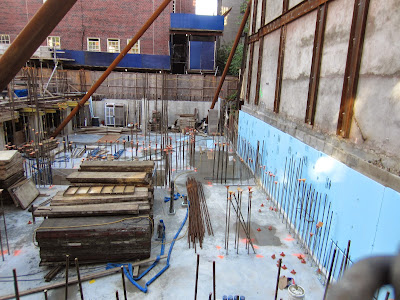 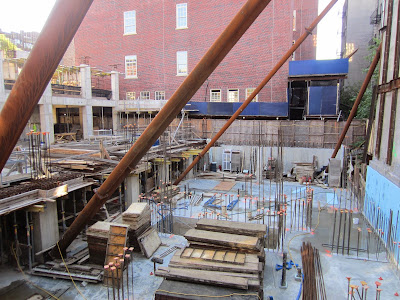 As we've pointed out in previous posts on this seemingly never-ending project, it hasn't always been easy. Nearby residents endured months of relentless pile driving and other building-rattling noise. There were complaints about cracks next door at No. 183. 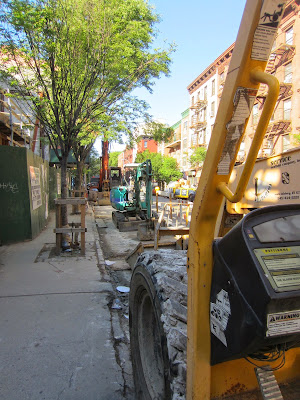 Meanwhile, we finally got a glimpse of the boxy rendering. It remains in the construction office next door. (The renderings can usually be found on the plywood along the actual construction site.) 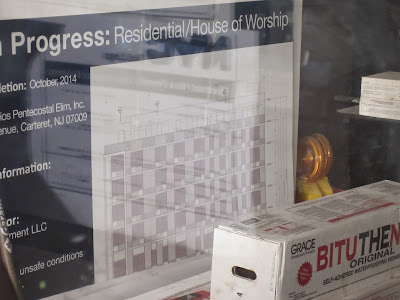 The rendering notes a completion date of October 2014.

[Updated] The 'insane' noise and pounding are back at 185 Avenue B
Posted by Grieve at 5:20 AM

Email ThisBlogThis!Share to TwitterShare to FacebookShare to Pinterest
Labels: 185-193 Avenue B

This site has been an eyesore for a long time, good to see it will continue to be an eyesore after the construction is done.

Amazing how they started long before the Spink Houses broke ground, yet Spink is up and the interiors are being fitted out, while this place is still a hole in the ground.

Your uncle GAVE you the theater with your promise that you'd keep it as a THEATER, not cash-out and create MORE Yuppie ghetto housing with a church space for yourself....

I'm not so sure how "yuppie" the housing will be in this building. The long delay might mean cutting back on any materials inside or out which might have made this building less soviet block in style. At least there will not be any bars renting the ground floor space.

Might be a coincidence but the facade brick work on the public school next door was completed last week and this building restarted construction the next day.

It's been hugely disruptive to the three schools next door. Imagine trying to teach through that pile driving! And I'm pretty sure they've had some structural issues, too. It's a goddamn miracle no kids have been run over thanks to the bottlenecks on both B and 12th that the site creates. I'm no theologian, but that preacher better rent some of those units to poor people, or he's going straight to hell, as far as I can tell.