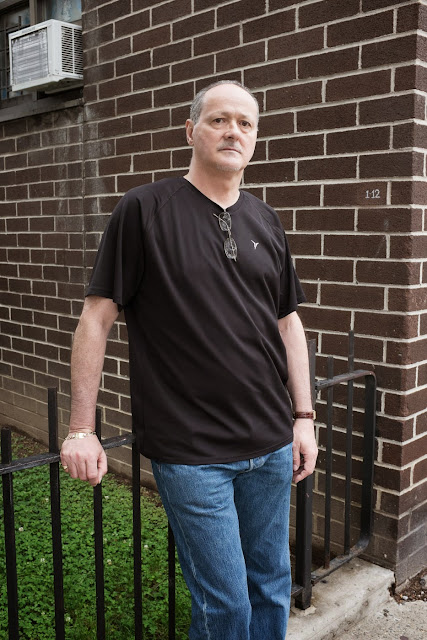 I grew up in the neighborhood. I’m 58. I’m Italian by descent. I’ve seen all the changes. It’s changed for the better, in a sense. For some reason my journey through life has always brought me back, for whatever reason.

When I was growing up, it was a rough neighborhood. I remember in the 1970s and 1980s on 6th Street, you could get a 6-room apartment for like $35 a month, cause it was a bad neighborhood. Drugs were running rampant.

I’ve had a couple of careers in my life. I went to Brooklyn Automotive to become an auto mechanic, but I wound up becoming a boiler mechanic. I did that for 14 years. I actually became a heroin addict. I’m in recovery now. I’ve been 18 years clean. I have total, absolute sobriety, but I lost that job and was running the streets with the drugs, selling — and eventually I did time.

I came home, got into the plumber’s union, became a plumber. I wasn’t one to rob so I had to support my habit one way or another. That or be sick. You do what you gotta do. It’s a crazy lifestyle. It builds character in the negative sense, but the things that have happened to me in my life, that’s what made me into the man I am today. It’s funny how God gives you a hand and you have to play it out. I’ve been blessed that I woke up and found sobriety.

Avenue B, right over there where there’s a condo, there used to be a gas station. I remember standing out there in the winter one time with the 55-gallon drums, with wood and whatever you could burn because it was like 10 degrees outside and we were out there at night trying to keep warm. There were none of these outside restaurants. Art galleries were unheard of.

It’s a beautiful neighborhood. It was always a nice melting pot of people. It was just that early on, when I was younger, the drugs were running rampant. It was always there when I was a kid growing up, but then it got worse over the years. It got to the point where places like Avenue B, Norfolk Street, were drug markets. Drug dealers were all over the corner. If you wanted heroin, the Lower East Side was the place to be. This was the mecca.

I guess they say it’s when you hit your bottom. I was thrown in the back of a police van once again, looking at another B felony for sale and I reflected back on my life. I knew then and there that was it. I couldn’t take it anymore. I remember, I made bail and I told myself I was going to get help, and I did at a place on 6th Street. I went to a place called Su Casa, right over there. It’s a treatment facility. Actually, I’m a counselor there now. So you remember me saying at the beginning that for some reason I keep coming back after things happen.

I was actually paralyzed from the chest down. I’m walking with this cane because my legs are weakened from the paralysis, so I couldn’t do the plumbing work that I was used to. I was in a wheelchair for a month. That’s a whole interesting story in itself. They gave me steroids cause a virus attacked my spinal cord and kind of cut everything off. Physically I’ve been the same for awhile. I accept it for what it is. I’m walking. I had to learn how to walk and I had to learn how to live in chronic pain.

After I accepted dealing with the pain and that I wasn’t going to get any better I went to college. I got an associate's degree in drafting and design in 2008 at City Tech. It took me three years to get a two-year degree but I proved to myself that I could do it.

In 2008, the economy was really bad. I wasn’t getting any work so I decided to go to Metropolitan College down on Canal Street to get my CASAP — Control, Alcohol, and Substance Abuse Counselor. I knew I could get a job doing that, and I had affiliate with Su Casa, being an alumni. It’s where I got clean. I lived there for two years. They saved my life. I mean, I had to do the work of course, because if I wasn’t open and willing and if I didn’t have the desire to get clean… You have to want to. And it’s been fulfilling.

I guess my life has kind of come full circle and now I’m a counselor in the rehab. Su Casa is a treatment facility — a 12- to 18-month residential program. My house, your house. It’s an extremely good program, with people from all walks of life and from different states.

Again, I’m a product of it. It’s behavior modification. Addiction is basically a disease, so hit it kind of hardcore there, with consequences for negative actions. If you make a bad decision you have to pay the consequence. The only difference is that in there you may get like a contract called LE, which is a learning experience where you clean or work all day. But in there it’s just a contract, whereas out on the streets that negative behavior can catch you a bullet. There’s really nothing in there that could hurt you.

It’s tough for the young kids coming in today. There is [a resurgence], especially with the young kids with the Xanax and then the Oxycontin. Some people get into car accidents and then they become addicted to Oxycontin, but Oxycontin is expensive so they go to the heroin and the methadone. I’m just happy I got clean when I did because I could see myself doing the same thing, as far as the Benzo. That’s a hell of a thing.

There’s always hope. There are a lot of people that may want to get help. A lot of people know we’re over there, but for those who don’t and are seeking help, I would recommend it.

Godspeed Anthony! The LES chewed me up and spit me out as well in the late 80s/early 90s. It sure was a supermarket for dope back then. 18 years clean right now for me. It's a miracle any of us made it out alive.

Hugs not drugs! Keep up the great work!

God bless you Anthony. I probably ran into you a few times on East Tenth St between First and A, back in the days of the late seventies and eighties. Glad you survived and did it well. Keep on keepin' on.